Debut author Sam Peters brings us a fabulous interplanetary mystery described by the publishers as ‘your new SF thriller obsession’ which, after the first couple of chapters, proved to be pretty much accurate. Keona Rause is an intelligence agent who has spent five years on Earth following the death of his wife, Liss, in a terrorist attack and is now returning to his home planet of Magenta. He was shut out of the original investigation of Liss’ death and the unsolved mystery still haunts him. He brings with him an illegal AI reconstruction of Liss who has been his companion on Earth and now is set on helping to solve her own murder.

Adding to the aurora of mystery are the Masters, an unexplained advanced technology who indulged in macro-engineering and geo-sculpting projects both on and off-planet, transported thousands of humans to other colony worlds and left behind vestiges of other advanced technologies. Intrigue surrounding the theft of such technology and shady institutes trying to replicate it hover in the background of the story, promising deeper layers to the plot.

Keona Rause inherits a team of three agents when back on Magenta, including the hippesque Agent Rangesh, whose speech reminded me so much of the llama from ‘Zootropolis’ that I had trouble remembering he was human for the first few chapters. Agent Rause’s team soon took on a solidity, though, becoming well-drawn characters with distinct personalities and parts to play in the developing plot. Agent Zohreya, efficient, dutiful, with connections in the military. Agent Patterson, unhappy at her assignment, distracted by personal problems but excellent at her job. Agent Rangesh, annoyingly laid back but with good connections everywhere. Each of these contribute to the investigation and affect Rause’s return to duty.

It’s an interesting, multi-layered investigation, involving drugs, illegal labs, strange goings-on at a research facility and the death of a well-known rich socialite, all of which may or may not be related. Underlying it all is Keona Rause’s desire to find out what happened to his wife, why she stowed away on the train that was destroyed in a terrorist attack and who was behind it.

I like the way that Sam Peters allows all of his characters to play a role, rather than reserving all of the significant discoveries and heroic actions to the main character. It gives the whole thing an air of realism, despite the otherworldly setting. Agent Rause’s on-going struggle to re-adapt to the 1.4 gravity of Magenta, the wildly unpredictable weather and the extremely unvaried diet of the locals are all background ingredients that flesh out this interesting society. There’s mystery and intrigue, hidden agendas and missing records and an excellent balance of old-fashioned detection applied to the circumstances and consequences of advanced technology. Intelligent and entertaining, this is certainly a setting and a group of characters with a lot more scope for future investigations. 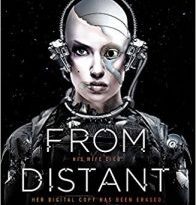