I know you probably can’t pull a copy of ‘Following Cerebus No. 9 August’ anymore and it looks like I pulled the remaining copy from it in a Neal Adams bundle. The most I knew about it that it obviously had a Neal Adams interview with Dave Sim, but not that it was also the history of their previous conversations and their trip to Niagara Falls when the Adams family were attending a Comicbook Expo in Canada in 2006.

Uniquely, Sim gives his impressions and a bit of body language that you wouldn’t normally see in conventional interviews. I discovered things I didn’t know because of that. Neal Adams wears contact lens, has never driven a car, a gym enthusiast at the time and a film buff, things you wouldn’t find out in other interviews. 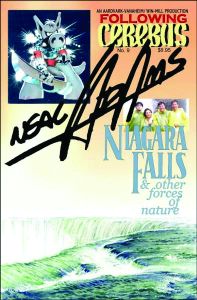 It’s interesting reading Neal Adams’ theories on Earth’s geology in comparison to other planets in our Solar System. To correct a few things, though. The crust of the floats on a layer of magma and the Earth’s ruptured as tectonic plates and very slowly move apart or clash which is what gives earthquakes. Apart from the gaseous planets, the other rocky based planets don’t have a similar problem compared to ours and probably less fractured. Atoms have always had a mish-mash of sub-particles and it’s only in recent times that we’ve been able to observe them.

I think I was struck more by how the young Neal Adams was influenced by Elmer Wexler and Johnny Craig about thinking before he drew and getting accuracy in what he was drawing. A lesson that should apply to writers with anything that readers are familiar with. Oh, it looks like a Gillot 290-pen nib is still available in the UK for those who want to practice their inking.

It’s very interesting how Adams discusses going through phases of drawing like or being influenced by selected artists at the time, even if his own style tended to come over stronger. We who draw or paint have done something similar so it’s nice to know this is something we all go through in the learning process. He also modifies his style to the needs of the end product, hence the sometimes cartoony look of some of his work.

It’s rather interesting that a famous half-finished ‘Green Lantern’ cover wasn’t rejected by DC Comics but by Adams himself who thought he could do better. Looking at his first cover design for X-Men # 56, I’m less concerned by the team chained to the title logo but why a tubed Alex Summers is floating in front of the Living Monolith.

Finally, a discussion about the Neal Adams name being used in promotion getting a different rate in the books DC Comics reprint of his work makes a strong point about what sells a book. Oh, you learn a lot about the procedures when visiting Nigeria Falls and don’t get a dunking in the extended drizzle.

Although this book is now 15 years old and unlikely to get a reprint, the font used is especially fine, especially in italic, that you need a decent natural light to read it in if you can find a copy and want to be completest.

(pub: Aardvark-Vanaheim/Will-Mill Production, 2006. 106 illustrated A4 magazine. Price: I pulled my copy for $10 (US) but looks like Neal Adams’ website has finally sold out)