As I recently bought a pile of books about Science Fiction from earlier decades, the original reason was to remind you people out there about SF’s history and, for those who missed it, a chance to fill in background and look at earlier material and not just rely on today’s interpretation. However, after Sam Lundwall’s assertion that histories of SF only dwells on American SF, this has now also become a mission to prove otherwise. Brian Ash’s book, ‘Faces Of The Future – The Lessons Of Science Fiction’ comes from 1975, 4 years after Lundwall’s ‘Science Fiction – What’s It All About’.

It’s also a British product and, as I previously commented, we’re more conscious of SF from elsewhere. Checking up on Brian Ash’s history he wrote several books on SF, including editing ‘The Visual Encyclopaedia Of Science Fiction’ in 1977, so we can at least affirm him as an expert. Alas, he died in 2010. 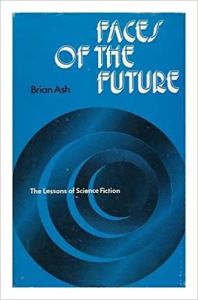 This book starts with an exploration of the history of early SF which is on this side of the pond and Europe with a lot of early SF novels before it became a genre and what makes good SF. Oddly, his first American example is ‘The Space Merchants’ by Frederick Pohl and C.M. Kornbluth with SF as satire.

After a look at HG Wells in the fourth chapter, it isn’t until the fifth chapter that Ash looks at the American scene. The main significance for Gernsback is the coining of the term ‘Science Fiction’ or ‘Scientifiction’ than him being blessed with his writing talent. I did check the bibliography and Lundwall’s first English-written book is in there so not surprised at the Swedish ‘Hugin’ magazine getting a look-in as indeed we in Great Britain with two magazines in the 1930s.

It’s inevitable that all books about Science Fiction that their authors will pick examples from the books they’ve read and, if your memory works a little like mind, you will find and remember certain books come up time and again. This is less about copying other authors but just the strength of the stories. Apart from Pohl/Kornbluth’s ‘The Space Merchants’ there are other choices from Clarke, Van Vogt and Heinlein. A surprise one is ‘Anybody Else Like?’ by Walter Miller Jr, him of ‘A Canticle For Leibowitz’ only to discover it is a short story and if you want to need it you need to get his anthology, ‘Dark Benediction’.

Rather interestingly, Ash’s example of what went wrong with the HAL 9000 in ‘2001’ as an electrical fault, even without seeing ‘2010’ isn’t right but back then people didn’t really know as much about computers as we do today.

Ooh, there’s a chapter on psionics and the evolution of mankind. Ash makes a point about how we will tolerate and understand autistic children and not see them as a threat. Not so such about the later part but certainly he scores a valid point on this.

Much of this book towards the end is given to fiction synopsises, the usual option when to increase a page count but nevertheless does present some usual pointers from the time period.