‘The Rage Room’ by Lisa de Nikolits is a near future dystopian Science Fiction novel. 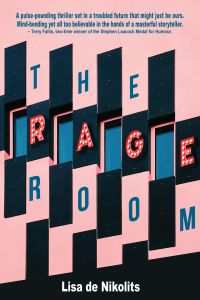 Sharps Barkley grew up angry and remains angry. We first meet him the rage room venting his anger by smashing up everything to hand. He cannot face going back to work the following day after a year off on paternity, leaving his addict spendthrift wife Celeste in charge of his son, Baxter. Divorcing her is not an option neither. She is the daughter of a board member of the firm he works for and had gained his promotion because she fell in love with him long enough to marry him.

If sacked, he would become one of the scum ‘Blowflies’, the unemployed who live off state hand-outs in old ‘highrise condos’ and are shunned by the workers. Then what will happen to Baxter?

Sharps also has Obsessive Compulsive Disorder (OCD), a natural consequence of his anger. Everything must be clean and in its place. But he will have to back to work with Jazza, who secretly wears ladies’ underwear and illegally owns real live fur babies (animals) that make his apartment a germophobe’s nightmare. Jazza provides the ideas that Sharps can sell on the Crystal Path, which is the internet using brain implants. They make a productive team and have to work together, but there was no way Sharps is letting him anywhere near Baxter. This hurts Jazza.

Sharps will also have to deal with his immediate boss, Ava, who will resort to any means to get what she wants. She has designs on taking the world over from Minnie, the AI that controls the world. Minnie, who took control of the weather, exchanged farming for food production from labs and bioreactors and introduced rage rooms.

It is not surprising that Sharps heads for a meltdown and ends up killing Celeste, his by then two children and his mother and ends up being framed for fraud and murders he did not commit.

Sharps regrets killing his children. He is offered a chance to go back in time to stop his children being killed. There are consequences. For one, he ends up realising that he had totally missed what was really going on during his first pass through that time. For another, he ends up changing to course of events with dire consequences.

The strength of this novel is the way it peels back layer upon layer of what is really going on the consumerist-orientated dystopia. The clues are all there in the first part that leads to Sharps murdering his children. So there are no cheats going on for the reader.

The weakness is that there are details of the world-building that I find unbelievable. For example, the Vatican, Minnie’s mainframe that stores everyone’s info, is ‘miles and miles of hard drives—bigger, in total, than the size of… Texas’. There are just not enough rare earth elements on our planet to produce a computer that size. Another example is the use of fields as they need cultivation and yet farming in the traditional ways has been stopped. They do not affect the overall story, but they are annoying.

‘The Rage Room’ is for an adult readership and has underlying political messages. These include the dangers of over-reliance on AIs to sort our problems out, the devastating effects of hyper-consumerism and what can happen if there is stratum of society that is pushed to one side. This novel follows in the footsteps of the likes of ‘Brave New World’ and ‘1984’, but is applicable to our time.