Two trappers, Joe Canton (actor Jack Elam) and Old Willie (actor unknown), in the Louisiana swamp find their bait has been eaten at different sites. Back in Chicago, university student Rives (actor John David Carson) is discussing sasquatch or Big Foot, pointing out that they have never attacked humans. Obviously, no one told the hunters in the swamp or fellow students, Rives and fellow mature student Pahoo (actor Dennis Fimble) head south to look for it after hearing about Canton’s encounter. The sheriff, Billy Carter (actor Bill Thurman) warns them off but they tend to ignore him. They meet Orville Bridges (actor and writer of this film, Jim McCullough Jr.) and his grandfather (actor Dub Taylor) and for $25 get their co-operation to help them. At the Orville Farm, they record the Big Foot’s growl from the barn but have to take refuge in the house until morning.

They befriend two local girls, Becky (actress Becky Smiser) and Michelle (actress Michelle Willingham) whom they meet up with at their camp later that night and have to stay in the tent when it rains. Of course, they get a visitor. Did I say one of them was the sheriff’s daughter? Anyway, he locks them up for the night. The creature makes a little visit to Canton’s home, who not being happy, goes to the sheriff to get a posse but is clearly drunk and gets locked up with the two students. Despite the sheriff telling them to leave town, they take up Canton’s offer to visit his home but quickly move on to set up camp elsewhere.

The rest is spoiler and will make you jump a bit. They certainly did.

For a low budget film, the script is strong and makes you jump at the right moments. I can see this being shown in 1976 and getting the audience to jump, too, ensuring they were paying attention. I’m jumping over a lot of the details but they are used to dimensionalise the film and you do care for the characters. I can understand why they want ‘Creature From Black Lake’ to get cult status. 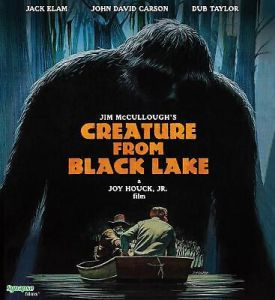 The 19 minute interview with cinematographer Dean Cundey is very revealing, showing the Louisiana people loved them filming there. He also created the creature’s look. From his descriptions of cropping for TV and video, this looks like the first time in seeing the film in its original widescreen format. Oh, Ralph McQuarrie painted the poster which should also stir some interest. Oh, in case you didn’t know, Cundey went on to film the likes of ‘Halloween’, ‘Who Framed Roger Rabbit’ and many other genre films.

The audio commentary is with horror scholar Michael Gingold and film historian Chris Paggiali. Actor Jim Gareth is the other trapper at the beginning of the film. Joy N. Houck Jr. played lecturer, Professor Burch, and was the son of the producer. I’m mentioning these credits how showing that these two have done their research. Keep your notepad ready as they go through all the Big Foot movies, mostly to pad the time but I found myself looking them up in general. They obviously haven’t seen the Cundey interview for whom created the creature here. Their going through the reviews of the film and countering the comments is a useful contrast as both like the film. They don’t know who Roy Tantum who acts as Fred and the creature is. He’s the chap that they bump into on the trip down to Louisiana but I had to work that out myself, too.

I do think this film gets better with repeat viewing. Granted there is a fair amount of padding but the photographic values are all there making for a good production.