I think the cover of Qiana Whitted’s book, ‘EC Comics: Race, Shock & Social Protest’, should tell you what the subject matter is. Although I’ve read only a few of the stories over the years, including the notable 1953 story, ‘Judgement Day’, I wasn’t even born when they first came out and expensive reprints have only been a recent phenomenon. Even so, as comicbook fans, we are at least familiar with the content.

Although they were decked by Frederic Wertham, as its publisher Bill Gaines pointed out, the cited story ‘The Whipping’ was all about racial prejudice not intolerance. Indeed, many relevant stories were part of the EC Comics mantra, fulfilling Gaines desire to educate their readers. 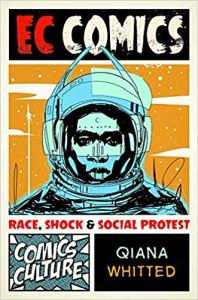 The ‘Introduction’ is really the history of EC Comics, although I do think it should have been under a chapter heading. In the old days and probably true today as well, people like me might read the introduction but most skip them because they want to get on with the meat of the book and get conditioned that way. When you get to the first chapter, you get an explanation as to how the EC Comics stories were prepared, text boxes and dialogue on the page first and the artist had to draw around them.

As Gaines explained, it allowed the readers to take in their stories in two ways, with the text boxes adding extra depth and one in four stories dealing with social problems. Then you’re thrown in the deep end with more detail about the Wertham trials and it becomes obvious that those standing as judges don’t know how to read a comicbook page. An observation I’m going to make is that considering many if not all newspapers from those decades ran a comic supplement, how can all of these people have not read them in childhood? Quaintly, the EC Comics move to have more use for textboxes than other comicbooks out there, people are attracted to read everything than just look at the art. 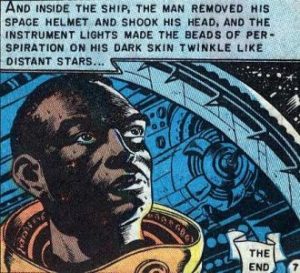 The second chapter looks at how EC Comics dealt with prejudice in three stories, with sample pages from each. In many respect, I wish they actually filled the page for easier reading. It does make for some irony that the main company that Wertham accused of extreme violence was also the one that did the most to address racism. Indeed, considering how many analysis of ‘Judgement Day’ is given, I think I would have included the entire story for the reader to read than give a blow-by-blow. From a British perspective, the ending is something we would have classed as having a touch of irony.

Although I doubt if Wertham or the judges were racist, it is apparent that they or the later Comic Code Authority knew quite what they were dealing with. If anything, they got the wrong bull by the horns and should have done more towards using the comicbook medium to educate than cause a witch-hunt against them.

A major criticism of this book is the number of notes. 23 pages of them. Yes, I know it’s important to quote sources but it become a bind when you have to wade through them for the odd pertinent comments. This isn’t just a problem with this book but when you subtract this and the index from the page count, you only have 139 pages left. Oh for the times when notes were on the relevant pages as it at least taught authors how much space they took up. A horror story all of its own.

Although I thought Whitted was going to be covering old ground, there was some insights that I hadn’t thought of before. We take it for granted how we absorb reading a comicbook and even pick up the subtleties without realising some people can’t do it as well. If anything, there is definitely a need to show those who don’t how.