Before we start, an odd thing to consider from last week’s episode. If the Doctor hadn’t survived until the end, then how could she have installed the rescue equipment into falling aeroplane to save her friends? One has to be careful with how you play with time travel paradoxes.

Sorry for the slight delay. I was hoping that IMdB or elsewhere you have a few cast details on-line and some more picture choices. All praise freeze-frame on DVD recorders.

This week, after Graham wins 6 tokens to Tranquillity Spa, which automatically takes them all there off the TARDIS. One of the hosts, Hyp3n (actress Amy Booth-Steel), tells them that they can return at any time but they are there for two weeks holiday, along with 23 other people. Is it that easy for the TARDIS’ defence systems to be breeched these days?

Ryan gets infected by a Hopper virus that the Doctor cures but gives him hallucinations and he later meets Bella (actress Gia Ré), who is also recovering from the same virus.

The main discovery is Tranquillity Spa is housed on an uninhabitable planet with a deadly environment. The planet name if Orphan 55 and a touch, SPOILER, this is Earth.

One of the guests, Benni (actor Col Farrell), has been put outside the base but with an oxygen cylinder and the Doctor organises a rescue as his wife, Vilma (actress Julia Foster). However, their truck gets damaged and they have to escape to the tunnels although there are casualties. You do have to wonder why they all went and not just a few of them.

Oh, Bella is military leader Kane (actress Laura Fraser). Oh, there’s also an engineer, Nevi (actor James Buckley) and his son, Styles (actor Lewin Lloyd) making up the cast but does make them a little redundant considering the Doctor could have done the repairs herself. I’m still wondering how a virus can change an isotope of selenium or so quickly. Assuming the element isn’t pure, you would need a centrifuge to divide the isotopes and I doubt if that would change in the future. 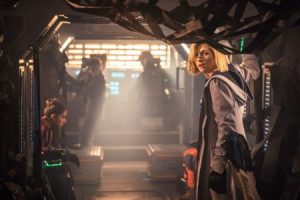 I’ve only touched on some of the elements in the story and not the main spoilers and there are several so I have been careful.

Elements of the story borrow or touch from ‘Aliens’, the original ‘Planet Of The Apes’ and a touch of ‘Genesis Of The Daleks’. It does present a contradiction to the end of the world in the far future as seen by earlier regenerations of the Doctor. The finale does present this as only one possible future for the Earth but that also appears to go against having fixed points in Earth’s history that can’t be changed. I doubt if the Doctor’s current ‘friends’ can stop a nuclear war happening so somewhere down the line a certain Time Lord must be having another intervention. The real problem here is we have no idea how far into the future they were. I mean, just because the Earth might have had such a radical Armageddon, it doesn’t mean the human race has died or where did Bella and Kane come from? If it is an alternative future, then how did Graham get the tickets? As we’ve seen in the past, it takes a lot of work for the TARDIS to cross into alternative timelines.

Although I’m critical of some elements of the story, scriptwriter Ed Hime does pack a lot of detail into this episode and moves things along. If anything, it’s more of a worry that the Doctor doesn’t save more people. There’s a lot of self-sacrifice going on here. The Doctor’s friends are lucky to survive really and, as Graham points out, he’s only a bus driver and none of them really have any qualifications to help this time.

Oh and the Doctor now has yellow braces. It also looks like having a blue nose plaster and sucking your thumbs is going to become the norm to the fans for a while.