There are two prominent things to recognise from the text of ‘DC Comics: Covergirls’. Artist Adam Hughes in the introduction says sexy women sell comicbooks. Writer Louise Simonson points out that all the characters within were created by men. Even in modern times, you would have thought with all the lady comicbook writers we’ve had in recent decades, we would have had an iconic super-heroine created by at least one of them. 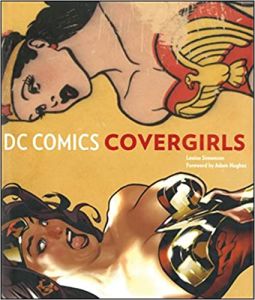 Anyway, the focus is on DC Comics covers and their significant lady characters on them with emphasis on Wonder Woman, Lois Lane and Supergirl before categorising the ‘Gotham Girls’ and ‘Vertigo & Beyond’ for everyone else. With the latter, Louise Simonson makes a brief appearance herself as for House Of Secrets # 92, she was the model that Bernie Wrightson used for the pose.

As much of this book is cover art, you’ll be being it primarily for that. I do have to wonder how the decisions were made for some to be full page and some really tiny as A5 scale. The same with the art credits. Surely, it would have made sense to have them with the full page art than pointing directions all the time.

In many respects, as Louise Simonson links how the various characters have evolved over the years, you practically have an illustrated version of costumes and who as worn them.

If you want to play a game of who she missed then obviously a lot of the super-villainesses, who undoubtedly could do with a book all to themselves. For super-heroines, you do have to wonder if there wasn’t a good choice of covers to pick from but I would raise question marks at no sign of the Helena Wayne aka Huntress who was far sexier as drawn by Joe Stanton than her successor, certainly Rita Farr aka Elasti-Girl and no honourable mentions for Althena Tremor aka Dumb/Tough Bunny or even Platinum from the Metal Men.

Only a couple of the female Legionnaires got shown and outside of the Birds Of Prey, the LSH must surely have the biggest concentration of female super-heroines. Whatever, it’s a good game to play on a rainy day to test for DC Universe knowledge or these characters never got inspiring cover art.