‘Color Out Of Space’ is the latest film adaptation of HP Lovecraft’s horror story tells of a meteor strike in the Massachusetts backwoods. Toward the beginning, director Richard Stanley sets his story in a pleasant natural setting. As the story progresses and nature corrupts or gets corrupted. The herbage becomes harder to understand and to visually parse. The meteor goes missing and the woods and everything in it becomes corrupted and sinister.

Animals deform and the food form the livestock becomes poisonous. We see eggs on the farm grow double yokes, one yellow and one black. Animals deform and the food from them becomes toxic. Everything seen on this planet becomes corrupted. It turns the sky to many colours, some of which are likely unnamed even outside of the film. The poison of the meteorite takes a while to spread and then the trouble starts. 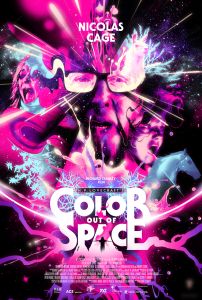 This film is the latest adaptation of H. P. Lovecraft’s horror story of a meteor strike in the Massachusetts back woods. In one of Lovecraft’s more popular stories a meteorite brings to Earth the color of a frequency of light never previously seen on Earth. The meteor goes missing and the woods and everything around it becomes corrupted and evil..

It is in the nature of the story that it has a slow start. The meteorite crashes during one of the most spectacular electrical storms on film, albeit created with special effects.