As the creators of ‘Reboot’ explain in their audio commentary, this was the first fully computer animated TV series that attracted children and adults alike. With no one knowing what was inside a computer, it gave them the freedom to make Mainframe the way they liked. Oddly, as the users, the humans when playing games are the enemy. Guardian 452 aka Bob is there to protect the Mainframe with its residents and commander, Dot Matrix, and her young brother, Enzo, and the dog Frisket who run it.

There is also Phong, the sage whom Bob goes to for advice. The chief villains are Megabyte and Hexadecimal, the latter has a perpetually changing face mask. The user drops games into the Mainframe and they reboot to have the appropriate guises and need to win of face erasure. Think of that when you play against your computer next time and you lose. For them, life is treated in nanoseconds and they need all of them to survive or face deletion. 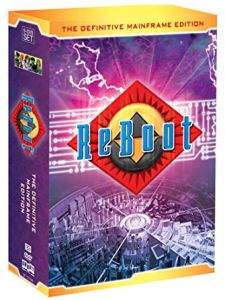 Back in the early 1990s when ‘Reboot’ was created, it cost many million dollars of money, collected from early investment in the series based on a sample and 9 years work getting it, and a small team of creators working long hours in a bedroom. It also had decent stories that have held up today and willing financers because it was the first of its kind.

There was a 2 year gap before the second season came out in 1993. It also has some of the best episodes and the changing face of computer software when Hexadecimal uses Paint to change Mainframe. There’s also a lovely spoof of ‘The X-Files’ with Gillian Anderson providing her own voice.

Season 3 is loaded with panaches and combinations. I mean, who would have thought mixing James Bond and Wacky Races? Likewise elements of ‘Star Trek’ and super-heroes? A beautiful panache of ‘The Prisoner’ mixed with Mainframe.

Season 4 divided into two main plots came out in 2002. The stopping of Daemon, a super-virus taking over the Net and getting into Mainframe and the problem of having two Bobs and how do you tell them apart? The end suggested another season but that never happened.

The Bonus DVD starts off with a 22 minute ‘Fast Forward: The Making Of Reboot’ from 1992 so really centres on the first season and you see bits of everything, including prototypes of primitive digital animation before we get what we actually see. I doubt back then many knew what they were really looking at but today it does make a lot more sense.

The 31 minute ‘Looking Back At Reboot’ was filmed in 2011 with co-creator Gavin Blair going over the 9 years it took to get ‘Reboot’ off the ground and how computer animation had evolved in that time. He also goes over the voice cast. It’s a shame that we don’t have accompanying photos to show what they looked like. I tend to agree with him that the series could literally do with a reboot with further adventures. Saying that, modern CGI might transform it but could risk losing the magic of the original series.

Finally, 6 minutes looking at the animated character models and some of the backgrounds. The way it was done does suggest that it might have been used to show backers some of its look.

In many respects, the reason ‘Reboot’ holds up well after 30 years is its unique and nothing been like it before or since. It also has the same quality that has sustained the Century 21 product because there is little there to age it. Even the computer terminology is still there. Well, OK, Dot Matrix is an old printer but do you think Ink Jet would make as good a female character name? Graphics have made enormous jumps but that’s always happens and it hasn’t lost the popularity of old digital films.

If anything, ‘Reboot’ is even better than that using a mixture of humanoid and odd-looking characters. You can’t come away from watching this series without liking the characters and being scared by the villains. The character voice team really put their hearts into their voices matched by the art. Getting that right is the key to success for any series or film and explains why ‘Reboot’ was something to watch and cherish. You can buy each season individually and this boxset is more like a limited version because of the extras. Oddly, it isn’t readily available in the UK which is a shame.

Grab if you can and have a DVD player capable of region 1. Alphanumeric. Reboot!