‘City Of Lies’ by Sam Hawke is book one in the ‘Poison Wars’ series.

We follow two points of view with Jovan and his sister, Kalina. Jovan is being trained by his uncle to take over his role as a master of all things poisonous, but not to actually poison anyone. His job is to protect the chancellor of his country from being poisoned. His sister, Kalina, was meant to be the new poison master but she is not physically strong enough to carry out the job which involves being regularly poisoned. Jovan, on the other hand, has more trouble with his mental state as he suffers with anxiety and tamping down his obsessive movements. At the beginning of the book, both Jovan’s uncle and the current chancellor are both killed by poisoning, leaving Jovan and his best friend and new chancellor, Tain, to try to figure out what exactly is going on. Added to this, the country folk start to rebel and attack the city meaning the two lads are trying to fight on two fronts, those people within the city who they cannot trust and the country folk attacking their city. Oh and there are some scary local spirits who are really unimpressed with the current way the country is being run as well. 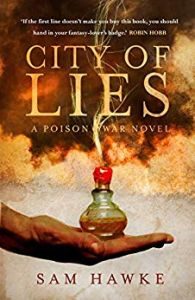 As I mentioned, this is the first book in a series, but it does function well as a standalone book so it’s not one you’re going to have to wait for the whole series to come out before buying and reading. I found that most of the main storylines were completed at the end of this book so, in other words, you find out why everything was happening. There are some aspects that it might be good to read more about but I’ve not been left on a cliff-hanger.

I loved that at the beginning of each chapter there was a page devoted to a different poison, it felt like they were pages from the poisoner’s handbook. It was interesting to read just a little more about some of the poisons and treatments used in the book. Each chapter was then taken by one of the two main protagonists, one after the other. I liked this pattern because it helped me remember who I was following in that chapter. I didn’t find that their voices were distinguishable enough as they both sounded a lot like each other unfortunately.

This book is full of political machinations, plots and sub-plots but they all get figured out in the end. It does take quite a long while for the main protagonists to figure out exactly what’s happening and they do make some really daft errors as they’re going along. Some of the twists I really didn’t see coming but others you just knew were going to be red herrings, mostly because there was so much book left!

I really admire Sam Hawke and her ability to completely destroy her characters. They just seemed to be constantly getting knocked down after making decisions about what they thought was going on. Every time they decided to do something you were just waiting for the other shoe to drop, for it all to come tumbling down around them. Every advantage they think they have is whipped away almost as soon as it’s presented to them.

One area I wish I knew more about was the significance behind the tattoos in this culture. They seem to denote people of different families and rank, but I was never quite sure. In the next book, it would be great if we got more of this, maybe instead of the bits about poison at the beginning of the chapter we get bits about the tattoos.

Overall, I did enjoy this book but I could do with it being a little faster in terms of pacing. I liked that it felt like a mystery novel with the clues being revealed little by little and then the big reveal at the end. I look forward to reading other books in the series to see if these characters get just a little more luck on their side.