I haven’t looked at ‘Cinema Retro’ for a few years now but spotting the cover of # 44 and Monica Vitti posing from the 1966 film, ‘Modesty Blaise’ did mean rare photographs, something this magazine is built around. This also applies to the other content, like ‘Fathom’ (1966). 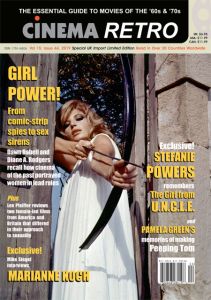 Anyway, the whole issue is dedicated to ‘Girl Power!’ and I’ll focus principally on the more geeky aspects. With the two aforementioned films, Lee Pleiffer’s piece on them focuses more on their leads sexuality, declaring Vitti is ‘cool’ rather than ‘sexy’. If you’re after photos from both films then this makes the magazine worth buying.

The interview with Stefanie Powers about her time on ‘The Girl From U.N.C.L.E’ was obviously done before Noel Harrison died in 2013 and she explains she was instrumental in getting him the part.

There’s also an interview with Marianne Koch who played Marisol in ‘A Fistful Of Dollars’ and is even more spry that Clint Eastwood who is a year older than her. Since acting, she became a medical doctor and in the interview here, goes over her career.

Bear in mind, much of ‘Cinema Retro’ looks at various film subjects so you also a look at the ‘Emmanuelle’ (film series 1974-84), ‘Take A Girl Like You’ (1970), ‘Peeping Tom’ (1960) and ‘Come Fly With Me’ (1963). A couple of them have been on Channel 81 in the UK. There’s also a look at the first British female producer Betty Box, who had a natural talent for picking comedy films. There’s also a selection of book and old film reviews.

If anything, the biggest failing isn’t so much with the quality of the magazine but manoeuvring around their websites and their short supply of back issues. However, it does allow you to read the material if you choose to.