‘Bloodbond’ is a quarterly magazine from Alban Lake Publishing that features stories about vampires, werewolves and shapeshifters, though only vampires seem to feature in this issue. 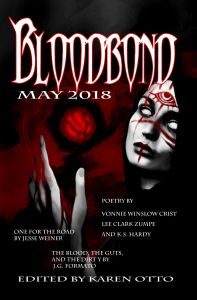 ‘The Blood, The Guts, And The Dirt’ by J.G. Formato is set in a future where there’s a Ruling Class and a Working Class. Faun, as they call her, is the ambitious girlfriend of the ruling chancellor’s son. It opens with them feeding off a donor and proceeds as a dynastic/political story. The premise of ‘Bloodbond’ seems to be that vampires can be put in many different settings. They are no longer lonely, aristocratic outsiders mugging people in dark alleys or seducing maidens. But that was such fun!

‘Side Effects: In Conversation With Senator Scott O’Connor’ by Allison Epstein. O’Connor is the Illinois representative to the American Hemovoric Senate and chairs the Energy Committee. He’s also a vampire and everyone knows. Agora Magazine sends Leah Goldstein, the narrator, to interview him. The story is mostly in the form of a transcript and the charm of the vampire as he dominates the hapless reporter is well conveyed.

Debby Feo goes back to the roots of vampire fiction in ‘Does Hydrargyria Cause Vampirism?’ by telling her tale in epistolatory fashion, like Bram Stoker. Michael O’Sullivan is curious to know if mercury poisoning causes vampirism and writes to some who might know. There are lots of exclamation marks! I assume that’s Feo writing in the style of the time as the story shows good knowledge of history and old prose. Story is an exaggeration because the exchange of letters between Michael and his vampire correspondents is more a slice of life than a crisis and resolution classic plot but I enjoyed it.

‘Poster Child’ by Christina Klarenbeek is interesting. A vampire’s kiss saved heroine Sally from consumption and she became a poster child for the benefits of transformation, hence the title. Blood looks like red wine, so it’s not unusual to have it bottled in vampire stories and having a feast with prizes for the finest vintages is the next logical step. Klarenbeek ties these themes together with others to produce something unusual.

‘One For The Road’ by Jesse Weiner has Brigid pulling into an American diner late at night for a meal. This was well-written but, in a book dedicated to vampire stories, the ending is not a surprise. As this is a short paragraph, I will pad it out by mentioning that ‘Bloodbond’, like most Alban Lake magazines, also contains several poems if you like that sort of thing.

My favourite story is ‘Stalking Nemesis’ by Mike Adamson who, like Debby Feo, exhibits good historical knowledge. It’s set around present-day Cambridgeshire, England but the background is rooted a few centuries ago. One female vampire is stalking another to prevent her doing bloody murder. To say more would give away the plot but it was very well put together and a satisfying read.

‘Bloodbond’ was a pleasant surprise. It’s available on real paper but I picked up this e-book back issue for a dollar in a Smashwords summer sale. I didn’t hold out much hope of anything exciting. I mean, vampires. What can you do with vampires after all this time? Quite a lot, it turns out. Different settings, characters and themes result in a wide variety of stories. I mean, romance. What can you do with romance after all this time? Yet, it thrives. No genre is ever dead as long as there are fresh writers with fresh approaches. I shall buy ‘Bloodbond’ again.

check out websites: http://albanlake.com/ and www.smashwords.com/books/view/822000