‘The Robot In The Next Cubicle’ by Larry Boyer will make you think of the automated voices that ring you up offering…well, whatever they try before you hang-up. The sub-title, ‘What You Need To Know To Adapt And Succeed In The Automation Age’ is a bit more revealing. In his brief history of the technology age, it quickly becomes apparent that robotics has removed much of the human workforce. In some jobs, it has moved them away from dangerous jobs. Boyer later looks at what you can do to find a job in the world we are growing into. Logistically, it does look like there is an emphasis on white collar than blue collar workers, unless those in the latter have the business savvy and ideas to carry them off. From my perspective, if you’re going to totally replace your workforce with robots, you have to expect a couple generations of mass unemployment so who’s going to buy the product you make? 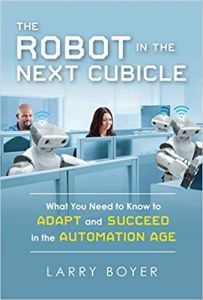 In his history, specifically on the development of robots and computers across the world, which goes back a lot further than you would think, there is no mention of Charles Baggage’s contribution to creating the early computer.

I’m not entirely convinced that SF is Boyer’s forte. Granted, he gives several examples from SF that have been given reality but using Jules Verne as an example of rocket travel is a bad choice. After all, it wasn’t a rocket but literally a bullet from a big gun so hardly accurate to what happened in reality. It would have been interesting to see Boyer’s reaction to examples from Asimov robot stories or films like ‘The Forbin Project’ or ‘Demon Seed’.

I was surprised to see mention of robots being given similar human rights to particular landmarks. I mean, at the end of the day, robots are programmed by humans and, as such, if there are any glitches then they not their creations are responsible. I suspect sentient rights will only be really administered when an AI/robot has to defend itself in a legal court.

Are we all going to have our homes locked into being run by computers? As you might be aware, I’m more than a little computer savvy but I only use what I need and not let it rule me. Apart from cost, generally, it also opens up a deadly scenario of hack one appliance means you also hack the rest and can bring any country depending entirely on computers to a standstill. I think there has to be a lot more safeguards in place before that happens.

The latter part of the book deals with business models in the USA and Boyer urges the entrepreneur approach and the ways to raise money to accomplish this. I did have a serious ponder on this and, even though I’m not a businessman, can see problems that he doesn’t really address. To raise money for any project, you still need a good idea and even that be duplicated and I can see a lot of legal battles as to who has the most rights to it. If you rush a production, then you’re surely going to have shoddy non-lasting work. With so many after the same money bowls, there is bound to be a lot of unintentional duplication with no guarantee of success. With mass unemployment, there is also a little matter mentioned above of who will be buying your product? In that respect, would those supplying financial aid be prepared for long term reimbursement and how much to charge for a product, even one that is digital.

Boyer does point out a lot of things you should be aware of that could see you through your first year of unemployment although I doubt if all firms will change to robotic workers all at once. The business model for that can show its own flaws when things go wrong or hacked.

I did learn some things from this book and for those of you in America facing this job crisis, it might at least give you some things to consider prior to being ousted by our mechanical friends.