‘Antiagon Fire’ is the seventh book in ‘The Imager Portfolio. The first three books were about the rise to power of an imager named Rhennthyl. The fourth book and those following are a prequel which tell the story of Quaeryt and his rise from being a scholar and secret imager to commander of mighty conquering armies. Imagers can create objects seemingly out of nothing – actually using molecules form nearby materials. They can move objects from place to place and even ‘image’ them away completely. A powerful imager like Quaeryt can topple buildings if conditions are right, although it’s a mighty effort that can sometimes near kill him. The series is set in the continent of Lydar and, as usual with fantasy novels, there is a handy map to guide you. There are five states in Lydar: Khel, Bovaria, Tilbor, Telaryn and Antiago. Quaeryt is a friend of Bhayar, Lord of Telaryn, who has so far conquered Tilbor and Bovaria and plans to form the whole continent into one state. Quaeryt thinks this is a good idea to ensure peace and prosperity for all and has the additional aim of securing a better future for imagers who, because of their powers, are feared and usually lynched if discovered. Now married to Lord Bhayar’s sister, Vaelora, he is sent with her to negotiate with the high council of Khel in order to bring that land under Bhayar’s domain, hopefully without a war. The main selling point is that Khel was previously under the control of Bovaria and its ruler was a cruel tyrant. Bhayar is much nicer. However, the high council are reluctant to subject themselves to another overlord.

Matters are further complicated by Antiago, a state to the south-west of the continent that has never been invaded because of its large fleet, strong defences and Antiagon fire, a sort of napalm that can be launched from catapults with devastating results on troopers mostly equipped with mediaeval weapons. There are muskets and cannon but not very many. The technological level of the society is about that of Civil War England.

‘Antiagon Fire’ features a likeable cast familiar from Quaeryt’s previous adventures: Bhayar; Vaelora; reliable old Skarpa, now a submarshal of Southern Army; Zhelan, the practical Major of First Company and, of course, Quaeryt’s little troop of Imager Undercaptains, some of whom are getting quite powerful now under his tuition. Modesitt, once a military man himself, conveys well the comradeship of battle companions and is also good on the logistics and practicalities of moving big armies around, supplying them and dealing with changing weather and landscapes. The background to all his works is convincingly solid.

To be honest, the stories of L.E. Modesitt, Jr. do not proceed at a cracking pace and are not filled with high excitement. The narrative is rather stately, like a great galleon proceeding slowly but steadily on its course but almost imperceptibly gathering speed. The lack of swiftness is more than compensated for by the weight and substance of the work. As well as the solid backgrounds referred to above, there is a lot of thinking by the characters about the rights and wrongs of their actions. It’s war, after all, and there are casualties. A constant theme of Modesitt is the hero being practical and strong enough to do what must be done, no matter the cost. This has to be carefully balanced with some humanity. The ability to make tough decisions and justify any means to achieve your ends is one that has been a source of pride to a few men in our own history, notably Heinrich Himmler. There’s a fine line to be tread when you are the strongest kid on the block, both by the fictional heroes of Americans proud of their pragmatism and toughness – the classic John Wayne or Robert A. Heinlein stance – and by the USA itself in the real world. With great power comes great responsibility, as a Spider-Man once said.

‘Antiagon Fire’ is a good contribution to the series and another big novel from Modesitt which is not afraid to tackle big themes. I continue to request his books for review because I enjoy them. Imbued with a mighty work ethic, he continues to pound them out at a fast clip so catching up with the back story if you come in late is a not inconsiderable task because they all run to several hundred pages. It would be unwise to start reading the series with this one but you could skip the first three, for now, and begin with ‘Scholar’, book four of ‘The Imager Portfolio’. Quaeryt’s story begins there and will continue in the forthcoming ‘Rex Regis’. I look forward to reading it. 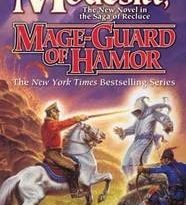 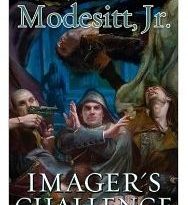 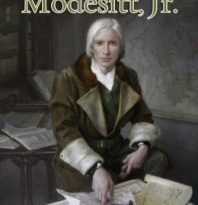