An alien abduction film that includes actor William B. Davis in it, has to be worth investigating. Are they trading on his ‘X-Files’ connection and, yes, there is a gag about that or because he’s the best actor for the part. A bit of each I suspect.

The basic plot scenario is late night radio host Ridley Kay (actor Mark Arnold) who discusses all manner of paranormal is driving home when he finds a young woman(actress Mhairi Calvey) semi-conscious on the road.

She reluctantly allows him to drive her down to where he lives and gives her name as Crystal. At the caravan park where he lives, Kay gets involved in a poker game with Crystal watching who is able to declare each card before its face is shown which obviously annoys the other players, more so as Kay has won their money. 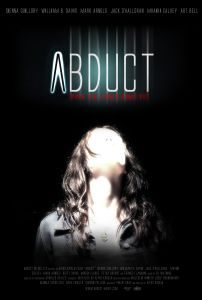 Slowly, Crystal’s life of abduction is revealed and an assortment of characters appear. For those keeping count, William B. Davis is Zane, the caravan park’s owner by the way. It also appears that the aliens want Crystal back and every UFO trope from the men in black to alien tracking devices to a UFO sighting is explored to keep you on your toes.

Saying too much definitely enters spoiler territory. The budget appears tight and depends on mood far more than special effects and it keeps your attention. Watch late evening and you’ll certainly be waiting for that knock on the door.

The direction by Ilyas Kaduki and cinematographer Charles Heales (I’ve learnt from my time reading the Michael Wiese Publication books about light management) ensures the film isn’t lost in total darkness with some interesting performances from all the cast. As such, ‘Abduct’ deserves a look if only to decide if it deserves to become a cult classic.

Careful what you eat.