This book, ‘Smoke And Mirrors – Special Visual Effects B.C. (Before Computers)’ by Mark D. Wolf, lives up to its name. Wolf says in his introduction that he isn’t that keen on digital simply because there’s so many people are doing it than having any real stars of special effects anymore. He’s probably right. Name me any famous digital animator who did something significant in the past 20 years and not those whom the studios are named after. No doubt there are some, just that their names haven’t reached down to our level. Much of it is down to software that is continually evolving. 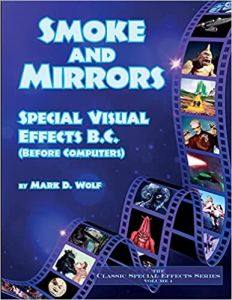 Then he jumps into seven chapters going through a history of different special effects. I had hoped that he would have an index or any index to track down particular people who cross-connect in different specialities over the chapters but he does seem to touch on most people’s work from early 19th century on to the early 1990s. Even L.B. Abbott’s team pops up which I’m glad as he can be neglected. Don’t just think all this book is about SF/fantasy film effects, there are lots of other films needing them, from war to historical to any that needed them. I loved his story about the 1942 film ‘The Flying Tigers’ and the Academy practically accusing them of being liars when they said no real aeroplanes were used in the film.

The thing about ‘smoke and mirrors’ is nobody is supposed to see the join and they didn’t. Don’t forget, a similar thing is also true of today’s films and the least expected movies have their fair share of digital effects. It’s easier to spot with SF or fantasy because we know a lot of it isn’t real but so much is done with down-to-earth films both now and in the past and its often only dodgy back projection, mostly for the number of takes through the camera, that we know the background isn’t as sharp as the foreground.

The biggest selling point here is the number of black and white photos showing how the effects were done and this book is choc-a-bloc with them, many rare, from the cinema and TV and we Brits get a fair share of the action. I suspect had he gone for colour, the price of the book would have rocketed although I doubt if there would only be a small percentage that way.

There are so many surprises with the chapter on matte paintings. They provide backgrounds where it’s impossible to create them cheaply, as with historical-based films. As a painter, I know what I’m looking for with matt paintings but anyone can be taken in for the few seconds they are on the screen as they establish the setting and your eye moves on. If they weren’t there, then your head would register something as not being right. Don’t always assume these matt paintings are large. Often as not, many are painted small to get mood and effect right. If you don’t think you can’t be fooled, look at ‘The Sting’ again. Apart from background detail, they also establish the mood of the scene. The fact that you don’t always spot them is down to the skill of these remarkable artists.

Every chapter is a delight in explaining how the techniques are done and then the stars and innovators on significant films. It’s hardly surprising that with ‘Men In Suits’, there is more emphasis on SF and horror films. Seeing Lon Chaney senior with his make-up boxes clearly shows how he kept custom boxes for specific make-ups gives an interesting insight. New make-up artists also took over as they developed new techniques with new materials. Certainly John Chambers revolutionised make-up with latex that allowed the actor’s skin to ‘breathe’.

It should go without saying that the props chapter is the biggest part, encompassing everything from small weapons to giant creatures. I was amused to be reminded that one of the iconic photos of Sean Connery as James Bond in the film, ‘From Russia With Love’, with a gun that wasn’t the Walther LP-53 but had to be replaced at short notice and the order forgotten to remove the extended barrel was actually an air pistol. Picking out a money shot amongst all the goodies is tough but how about on page 194 where we see Bruce the shark from ‘Jaws’ out of water and literally all geared up. You’re going to be over-whelmed with goodies here.

The oldest special effect technique is back projection in the chapter ‘Projection Composites’ and the problems of adjusting light and distance to make it look effective. The change from fragile sandblasted glass to cellulose-acetate composite by Willis O’Brien spared people from hotspot glass shards as it broke but clearly marked something for me. Not that they were necessarily concerned about safety, the materials they used back then we regard as toxic now, but to take advantage of every new material and keep effects moving along.

Nothing stood still in Hollywood, just a need to look better and economical. There are also some superb behind-the-scenes photos from ‘2001’, showing Kubrick saw it as a means to make a studio scene look like Africa and front projection gave the leopard the necessarily reflection in its eyes. Of course, this is all done with green or blue screen these days but this chapter does point out some interesting side-benefits of the technique that you hope modern directors and special effects teams can still learn from and see if they can reproduce with modern effects.

The final film is Wolf’s comments on 41 films that he regards as having dodgy special effects and there are some surprises amongst the usual suspects. I doubt if any film is 100% perfect. I should point out that apart from being an article writer, Mark Wolf works in the Independents aspect of the film industry starting off with Roger Corman, so he isn’t just a fan but historian. All the significant special effects people get special features and you get their diagrams on how it was achieved.

As you can tell from the length of this review, I’m totally enthralled by this book. If you’re into special effects books, this one will quickly get to the top of your list. Although not every film is covered, nothing on ‘The Phantom’ (1996) film which I regarded as one of the last of the old time special effects/stunt movies for instance, there is so much else that I sincerely hope he does another book digging ever deeper. Totally captivating.