‘The Box Of Delights’ has become a perennial Christmas favourite in many a household, especially those who saw the BBC version in 1984. That version perfectly encapsulated the joys and problems and many excitements that Christmas offers. It’s been constantly adapted for radio over the years and was produced in London as a stage play quite recently. Let’s see if this new version will be added to hallowed treasures like Dickens’s ‘Christmas Carol’ and ‘The Princess Bride’, the eclectic mix of Christmas delights that may or may not include ‘Die Hard’. 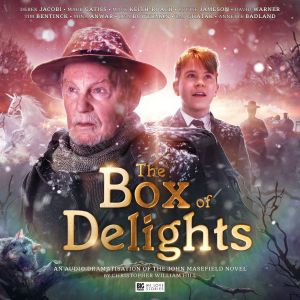 This is a simple story on the surface. We join Kay Harker (Mack Keith-Roach) as he returns from his boarding school, home for the holidays. Cue the sound of nostalgic steam train and porters calling at the station. He loses his ticket and a kindly old man, with his dog Barney, finds it for him on the platform. Kay returns to the train and is fleeced in a card game by two men who appear to be curates returning to the local ecclesiastical college. Meeting the old man again, he finds out his name is Cole Hawlings (Derek Jacobi), a Punch and Judy man who asks him to pass a message on that ‘the wolves are running’.

Kay is picked up by his guardian Caroline Louisa (Lisa Bowerman) who tells him some extra cousins are coming to stay for Christmas. He’s excited and manages to pass on the message in the town. Then the adventures begin. Kay’s cousins, the Jones, are the constantly hungry Peter (Lizzie Waterworth-Santo), growing up but still willing to play Susan (Deeivya Meir) and a right little madam who would like to carry pistols, Maria (Clare Corbett). There is fun to be had but also a mystery to solve when Hawlings entrusts the Box of Delights with Kay and Abner (Mark Gatiss) starts the ‘scrobbling’ of clerics in an attempt to find it.

Kay makes good use of the Box of Delights. Soon he is having exciting adventures and meeting strange and unusual people like the White Lady ( Annette Badland) and Herne the Hunter ( Barnaby Edwards, who also directs). He shrinks and flies and meets Rat Pirates and a helpful mouse.

Meanwhile, Maria is having her own adventures as she enjoys tea with the villains prior to being briefly scrobbled/kidnapped. They can’t put a good girl down.

As Kay becomes increasingly worried for Cole, the dire plot is revealed and the rather evil nature of Abner is also exposed. It’s a race against time to save the clerics, Cole Hawlings and even Christmas itself.

If you already love this story then you will not be disappointed by this new audio version. Sir Derek Jacobi takes the role of Cole Hawlings, the mysterious Punch and Judy man and the villain who appears a little later, Abner Brown is played by a perfectly nuanced Mark Gatiss. Mack Keith-Roach is also perfect as the fresh-voiced Kay. A special shout out for Timothy Bentinck as the police inspector who consistently fails to take any notice of the children. He’s definitely channelling James Grout from the BBC version but somehow makes the role in own-anyone for a posset?

John Masefield wrote the book in 1935 and this must have been an exciting book to discover as a young reader. It is a sequel to a lesser known book, to me anyway, called ‘The Midnight Folk’ which features Kay Harker in more thrilling adventures. There are strong elements of fantasy and references to folk history such as King Arthur and Herne the Hunter. The main difference in the adaptations is that the Jones children play a greater part in the narrative in the original as they are scrobbled early on, so Kay has his adventures alone.

Having the rather brave and careless Maria as the tomboy with a penchant for knives and guns is a breath of fresh air. Peter’s constant appetite is also a feature of amusement. The housemaid Ellen who gets lumbered with the kids is voiced by Mina Anwar who has the perpetual exasperated tone of the underpaid and underappreciated.

For me, this absolutely encapsulates the perfectly crisp and tingly feeling of Christmas approaching. The music uses the same themes from the BBC production by Victor Hely Hutchinson. The arrangement from the Carol Symphony is, according to Wikipedia, four preludes written by Hely Hutchinson in 1927 based on five Christmas carols, there is something delicious about listening to carols in the summer. It would be on my Desert Island Discs and I’m not even a believer.

I’m looking forward to listening to this again and again as the holidays approach and, if you’re driving home for Christmas, it’s perfect for your journey but if you’re on the train just watch out for those fake clergymen and their card tricks.