As the title of Linda Seger and John Rainey, ‘You Talkin’ To Me?: How To Write Great Dialogue’ should acknowledge is all about film dialogue. Seger is a script consultant and Rainey is a scriptwriter and how the two jobs work in the movie industry. Apart from being a university teacher on the subject, Seger’s job is looking over scripts for problem areas. 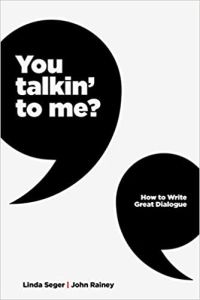 The use of books like this extends beyond films to any that deals with dialogue. If you’re aiming to be a fiction writer or are already one, understanding how to do good dialogue is always a learning experience. You really never stop learning whether it’s watching films, TV or people in the street, Their example of listening to real people and particular dialects and slangs and phonetics can build up unique characters. A potent line from the introduction is not to be too clever with dialogue and write a form that is realistically sounding. For myself, I tend to see character writing as a form of method acting. Set the requirements, education and limitations of the character and modify dialogue to fit a particular type.

Seeing how they distinguish British from American dialogue shows their own problems though. We certainly don’t say, ‘She went colleywobbles’ over here.’ In fact colleywobbles is something we tell children what they have when they have an upset stomach. Understanding different slang in different parts of the world is always problematic. I’ve never come across ‘giddy kipper’ in the UK neither, although looking it up it looks like something from up north and certainly wouldn’t use ‘argy-bargy’ in the sentence described. I’ve said in the past that when I use foreign language characters in my stories, the first thing I look up is the various swear words because it’s a common factor used in anger across countries. Seeing the selection of greetings and thank you’s depends whether or not you are going to use them or not. Translation software has made things a bit easier these days but is still unlikely to give the right slang and metaphor.

This book doesn’t just look at dialogue but plot conflict between characters. I do think they could have mentioned that it pays to raise it up a few notches so it becomes a bit more extreme in case viewers don’t get it. Even so, for fiction writers it is a good reminder not to have characters agreeing with each other all the time and get some spirit into an argument between characters points of view. I tend to find shorter sentences are more effective for anger or if a character has been running. Conflict is all part of the plotting and even if you’re on the same side, you’re going to have differing opinions in coming up with a solution.

I often wonder about subtext in any dialogue, mostly as to whether the reader will catch the double-meaning or implication. Of course, the word geeks out there who thrive on such things and love showing people up by what they didn’t spot. The same pretty much applies to metaphor and you would need to see it from both a character and overall view to get the implication.

It’s hardly surprising that based on my comments above about getting British words wrong and in the sentences we don’t use that I’m going to see problems in the chapter on dialect and accents. I’d love to know what they would make of pure Geordie, which even a lot of Brits have problems understanding when its combined with dialect let alone my own broad Somerset accent, which people think is the same as used in the 70s pop band The Wurzels’ songs, although they all hail from Wiltshire and we take the blame for it.

I loved Linda Seger’s recollection of the problems with saying ‘root’ in and Australian lecture and them confusing it phonetically with ‘rutting’, although I can’t recall it being used by the ozzies over here. Saying that, I can’t recall anyone but Americans drinking ‘root beer’.

When it comes to grammar, they cite the usual problem areas and urge all writers to learn their grammar rather than look like amateurs. Oddly, two areas they do ignore should have been covered. I do think some of the problems for Americanise is having the Harvard comma after ‘and’ in most sentences because it messes up asides if they had to rely on a small pause if they spoke it aloud. Neither writer appears to use it but it is still a problem that should have been acknowledged. The other comes from the correct use of grammar. Although it might seem like its sourced from Shakespearian plays and certain diction varies from character to character, a full stop denotes a breath and a words between two commas a lower tone to the rest of the sentence.

Please note, I’m only being harsh when it comes to use of British English and it’s probably their choice of examples that is at fault here. For future editions, I would certainly like to see more exploration of the differences in American dialects and slang away from the LA model if only to acknowledge they do exist. 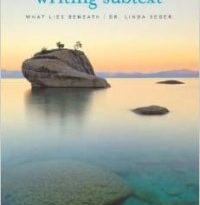