Once upon a time, trolls ruled over the land, their large, blue-skinned figures the ultimate in culture and civilisation for the smaller humans. These now rule over themselves but still place those with troll heritage in the prominent families in society. But tensions are rising. A divide is growing and whoever is murdering trolls and taking their blood is not helping. Revenge attacks have begun and are being used to justify further antagonism and violence across the world. 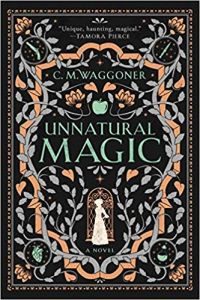 Onna Gebowa is a properly brought up young lady from a small industrial town. From a young age, she demonstrated a talent for abstract mathematics and constructing magical parameters. Focused on getting into university, the social tensions building around her are merely sad articles in the newspapers that don’t impact on her comfortable life. Until she happens upon a woman wailing over her troll partner’s corpse.

Cynallumwyntsira, known as Tsira, is half-troll/half-human and has always struggled to find where she fits in. After rescuing a half-frozen soldier fleeing a massacre, she begins to find her place in the world, until a magician comes calling with vicious intent.

Both Onna and Tsira find themselves on the trail of murder, magic, intrigue and gathering an assortment of allies to fight against a murderer who is threatening to tear their society apart.

C.M. Waggoner has written a beautifully detailed first novel in ‘Unnatural Magic’. Tamora Pierce’s review on the cover tempted me to read this book by saying it is ‘unique, haunting, magical’ and that is exactly how I think of this book. It lingers on my mind. ‘Unnatural Magic’ has so many elements that I loved from other books: a vaguely Victorian atmosphere, a murder mystery with intrepid detectives and a mathematical magic that is pervasive as engineering. But on top of these elements, Waggoner has overlaid a delicate web of cultural, racial and religious differences that pull at each character in different ways throughout the story. The epigraphs heading each chapter give lovely insights into the wider world with snippets of novels, advertisements, religious texts and local announcements giving a great sense of how this world is built without mountains of exposition that would bog down the plot.

The divisions of gender and family are interestingly portrayed in this book. The division is not between male and female in troll society, but by reig and vahn. Each individual chooses their role in the community as a leader, a reig, or a follower, a vahn, with the reig bound to care for and protect the vahn’s of their household or clan. Human society is more traditionally drawn between male and female, each with socially permitted roles that are being confronted, such as Onna’s determination to study the higher orders of magic, a rare thing for a female of her social status. Beyond husband and wife, however, there is householding, which appears to be a social partnering similar to a de facto relationship but with the sense of duty of one to care for another like the vahn/reig relationship.

Many authors have attempted, with varied success, to subvert gender norms. Naomi Alderman’s ‘The Power’ flips around gender roles entirely. Ursula Le Guin studied the effects of gender on society in her ‘Hainish Cycle’ of novels that feature ambisexual humanoid aliens. In Ann Leckie’s ‘Imperial Radch’ trilogy people are not distinguished by gender at all, the author using female pronouns for every character. The protagonist of Ada Palmer’s ‘Too Like The Lightning’ refers to each character as the gender they present as, which is not necessarily their physical gender.

With her introduction of reigs and vahns, Waggoner brings a more subtle approach to the question of gender and takes the debate away from physical attributes and into the roles that individuals chose to play in their society. There is little overt political statement. Instead, small references highlight the broader issues within what is perceived to be normal in ways that drive the characters motivations and perceptions of their own world in a way that did not force me out of the text to consider the ‘real world’ until after I was done.

‘An Unnatural Magic’ is a wonderful book on so many levels. At its heart, it is a murder mystery, but it ties so many threads to that central core without preaching about any of the issues that the characters confront. Waggoner has created a lovely balance of detective hi-jinx and magical marvels, love and friendship, that rises above the conflicts of race, religion and gender while simultaneously addressing them. I hope there are further books in this universe on the way!