It’s seldom that I’m stumped when coming to write a book review, but all I can think to say about Lorraine Wilson’s novel ‘This Is Our Undoing’ is that it is utterly wonderful. I’ll come back later when I’ve distilled my impressions into something coherent. 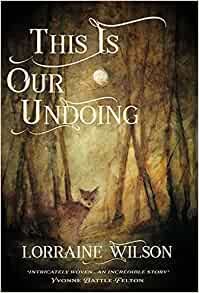 Having drunk a cup of tea, I’m back to set the scene. Sometime in the near future, Europe has fractured into even more states and many of them exert their authority with ruthless totalitarianism. Lina, formerly worked for the resistance in London State, until things got too hot and she went into self-imposed exile rather than endanger her father and adopted brother. She now lives and works in an independently neutral wildlife preserve in Bulgaria, owned and protected by the Environment Security Force.

She monitors wildlife and collects data along with Thiago, who has his own murky past. The locals resent what they see as interference in their traditional lifestyles and these are the ingredients for the initially peaceful yet tense existence that Lind now finds herself in.

When a prominent politician back in London is murdered, Lina’s former comrades are implicated, creating a link to her and to her family whose own lives could now be in danger. When the ESF agrees to shelter the murdered man’s family in Lina’s nature reserve, a terrible tangle of potential threats, long-buried secrets, accusations and Gordian complications develops.

The handling of Lina’s emotions, the body language of the various characters and the communication, both verbal and non-verbal, are exquisite. The story progresses at a deliberate pace, allowing each revelation, each interaction to play out, to dwell on the emotional resonance and the consequences. In the background, Lina’s knowledge of the local wildlife paints an intricate picture of their surroundings and each scene is framed by the movement of wild animals and punctuated by the calls of birds. The pages were steeped in atmosphere and compelling in their development.

The tension between Lina and Thiago, each aware that the other has a dangerous past but not really wanting to know what it is, plays throughout the book. Their fragile relationship with Iva, the local housekeeper, adds to the tension. She is sympathetic to the cause of the local resistance group and is torn between her employment and the ESF’s interference. When the grief-stricken family from London arrive, full of rage, despair and sedative-induced confusion, things only get more stressful. Lina finds herself questioning everything she does and says, walking a fine line between protecting her own family, caring for their guests and placating the locals.

It seems an impossible balancing act and, at times, Lina’s own sanity seems to be balancing on a knife-edge. It’s a claustrophobic tale in parts, yet wonderfully detailed and expansive. Motives and actions are called into question, loyalties and beliefs tested. From beginning to end, I was swept up in Lina’s complex and dangerous situation and her struggles with her grief-filled past. This is a fabulously woven and exquisitely beautiful novel.