‘The Trouble With Peace’ could have been that I haven’t read the first book in this series. This works as a standalone but will make you curious to follow the series, so maybe don’t read on if you haven’t read volume 1, ‘A Little Hatred’. 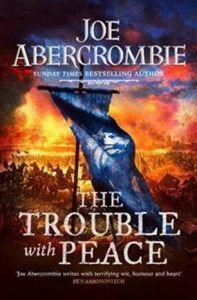 It all ended happily ever after. Don’t be ridiculous. Peace is hard and even the winners feel like they lost. Prince Orso is High King of the Union now and he’s not ready, that crown weighs heavily. The Closed Council is openly treacherous and there’s another fight coming whether he can cope or not. His mother thinks he needs a wife but he’s not going there due to recent disappointments.

Savine dan Glockta has a dilemma. She’s a rising star, an investor in the factories and slums of Midderland. She’s looking to change her image, perhaps princess of the people? One avenue of marriage has been cut off by her mother’s revelation but another is opened up which could solve an immediate pressing problem.

Her father, Arch Lekta, head of the King’s Inquisition, oversees amongst others Vick dan Teufel. She’s a woman who has reinvented herself. Independent and good at her job, she left her morals and squeamish in the penal camps and would rather be the one kicking sand in faces than the alternative.

Leo dan Brocke is a war hero but all its left him with is a serious leg injury. He’s not able to fight like he could and it irks him. He’s very handsome but not overwhelmed by braincells. His mother also thinks he needs a wife and she has just the candidate. He knows it will help him rule over Angland but what will he do about his group of friends? They are close but somehow there is something missing. He’s in denial about his sexuality which doesn’t help. His naivety might be the death of him.

Rikke, daughter of the Dogman, seeks a cure for the Long Eye. She can see the future and it makes her fit, puke and worse. It’s out of control but she needs to be strong when her father dies. There’s a power struggle coming and her connections to both Leo and Orso make her a pivot in the conflict that’s coming.

Plot is important but it’s the characters that make you invest in a book. It’s a lot to take in. Not a cast of thousands but enough to carry in your head. You can sum up the actions of people in this book by saying politics, greed and ego. There is not one character that you will really feel empathy with but there are several where you might say but for the grace of not living in such a god-forsaken universe go I.

It manages to make social history fascinating; many of the issues of the Middlerland industrial revolution are directly relatable. The urge to suppress the masses by keeping them poor and down trodden strangely leads to violent rebellion. Combined with the revolting middle classes who feel their teensy bejewelled toes are being stepped on make sure there is a march again to conflict. Peace, like sunshine between rain, is just the time we spend waiting for the next war.