‘The Ninth Talisman’ is the second volume in ‘The Annals Of The Chosen’ series, following ‘The Wizard Lord’. In that book, ordinary village bloke Breaker became The Swordsman, one of the Chosen who act as a check on the Wizard Lord who rules the land of Barokan and have the duty to either remove him from power or kill him if he does wrong. The Chosen are the Leader, the Seer, the Swordsman, the Beauty, the Thief, the Scholar, the Archer and the Speaker. Each carries a talisman that bestows an exceptional talent, in Breaker’s case, making him the best swordsman in the world. 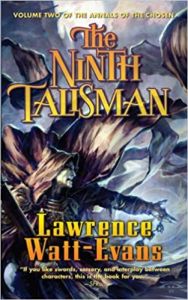 By the end of the last book, Sword, as he is now known, was beginning to wonder if the whole system needed scrapping. The Wizard Lord’s function was to take care of the weather in Barokan, punish outlaws and stop rogue wizards from causing trouble. But there are no rogue wizards now and hardly any wizards at all, less than twenty. Furthermore, the primary source of trouble over the past few centuries has been rogue Wizard Lords, not rogue wizards. Why not scrap the role and the Chosen along with it?

Perhaps because magic is part of the very landscape. There are spirits, called ler, who inhabit every natural creature and plant. There are ler of earth, air and water, too. In Sword’s home village, they negotiate with the ler of barley to make the barley grow and each village or town has its own ler, some more demanding than others, with which treaties and bargains are made and maintained by the village priest or priestess. In between, settlements are wild areas and wild ler and, although there are guides who have made pacts with them and can take you from one place to another, travel is rare.

Six years into the reign of a new Wizard Lord, Sword still hasn’t settled the issue in his mind. He lives peacefully in his isolated home village of Mad Oak, tending the barley crop with everyone else. Then a road crew arrives. They have battered their way through the countryside, defying wild ler by wearing ara feathers which protect against them and thus made a road to the next village. It turns out that they have been making roads all over the land, connecting villages and towns and bringing increased prosperity by trade. Hitherto, only the bargemen could get goods from other villages via the river. Now traders and merchants can take a cart from one settlement to another.

Rich fabrics from faraway places and exotic fish from the sea are finding new markets. Everyone thinks it’s excellent and blesses the Wizard Lord, who made it all happen. Sword isn’t sure if roads are good or bad but they are definitely a change to the old order of things, so he decides he must travel to Winterhome, speak to the Wizard Lord and assess the situation more fully.

Sword is still a likeable character and his interactions with the other Chosen, particularly the Beauty, the Leader and the Thief are natural and realistic. The land of Barokan is fascinating and well-realised. Many fantasy settings are stuck forever in a mediaeval state and crises are caused by evil wizards, orcs, elves or other characters. It’s unusual, but not unheard of for technological change to cause disruption. Sword discovers that the Wizard Lord wants to do away with magic altogether and run the land efficiently with a new kind of magic: Organisation. He has employed young men from all over Barokan to build two new palaces. One is in Winterhome at the base of the eastern cliffs.

The other is a summer palace atop those cliffs in the upland plateau, which is actually outside the land of Barokan and has no ler at all, so magic doesn’t work there. The new labour force also hacks roads through the wilderness, put bridges over rivers and dig canals. A quantity of them has joined his army. The roads destroy some wild ler, while sensitive priests and priestesses are made temporarily ill by the disruption to the natural order, but they are a tiny minority. Everyone else is trading, enjoying the easy travel and exotic new products and getting richer. What’s wrong with that?

‘The Ninth Talisman’ is a pleasant read. There are minor flaws. It’s a bit slow and Sword’s thinking about the big issues over and over gets a little repetitive. The Ninth Talisman of the title isn’t even mentioned until page 220. It may also be annoying for the casual reader to get to the end of the book and find no conclusion. The story continues in book three which I have to hand but would be peeved if I didn’t. Even so, I like Watt-Evans’ style and enjoyed the book. In a biographical note on-line, he states, ‘I try to write fantasy with an element of common sense to it — not so much mythic archetypes as sensible people.’ In that, and the slow pacing of a tale, he resembles L.E. Modesitt, Jr., whose work I also enjoy.

And so, onto book three, ‘The Summer Palace’, not with breathless anticipation, for these are not classics, but with quiet contentment. Fantasy trilogies are all right. I should read more of them. 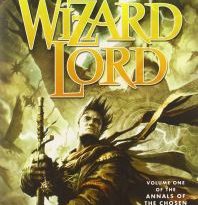 The Wizard Lord (The Annals Of The Chosen volume 1) by Lawrence Watt-Evans (book review). 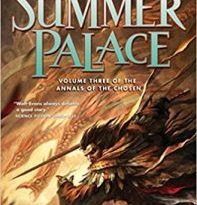 The Summer Palace (The Annals Of The Chosen volume 3) by Lawrence Watt-Evans (book review).

The Wizard Lord (The Annals Of The Chosen volume 1) by Lawrence Watt-Evans (book review).

The Summer Palace (The Annals Of The Chosen volume 3) by Lawrence Watt-Evans (book review).