This anthology ‘Robots & Artificial Intelligence’ from Flame Tree Publishing has the exciting notion of mixing classic tales on the theme with new ones by modern writers. The stories and extracts come at you in alphabetical order by author, beginning with Frank L. Baum and ending with Eleanor R Wood. Although I enjoyed the mix, the classic tales are a different reading experience from the modern ones, so I’ll deal with them separately. Here are some highlights. 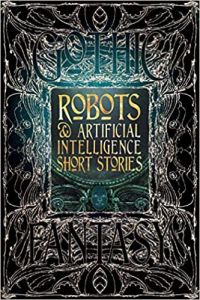 In ‘Ozma Of Oz’ by L. Frank Baum, Dorothy is on a voyage to Australia when a storm wrecks the ship and she washes up in the land of Ev, where lunchboxes grow on trees. Its inclusion here is justified by the wonderful Tik-Tok Man, a clockwork being. Ev is separated from the land of Oz by a desert in this entertaining period piece. I was aware that there were loads of Oz books and glad to have the chance to read one.

‘The Ablest Man In The World’ by Edward Page Mitchell, first published in ‘The New York Sun’ in 1879, is an early tale about a man with a mechanical brain, one Baron Savitch, a Russian. His secret is accidentally discovered by Fisher, an American, when he is mistaken for a doctor and asked to attend to the sick Baron. The ending is not what you would expect nowadays but probably fitted the spirit of the times.

My favourite classic extract is from ‘The Billionaires’ Conspiracy’ by Gustave Le Rouge and Gustave Guitton, possibly because of the translation work done by Brian Stableford. It’s an easy read and a neat adventure story. Olivier Coronal infiltrates a factory operated by the billionaires’ chief scientist Hattison, a prototype Bond villain with a giant, mighty mute man as his assistant. He’s building an army of iron men and automata to invade France. The chief billionaire has a beautiful daughter, Aurora, that our hero loves madly. Omniscient narration works for me and when Hattison’s happy, ‘an expression of contentment was legible in his physiognomy.’ Why does no one write like that anymore? I might buy the book.

On to the excellent new stories. I enjoyed every single one but these were my favourites. ‘Why Should Steel Birds Dream’ by Roan Clay features the Prince, an artificial intelligence with a body who has ruled the City wisely for several human lifetimes but now has a crisis. He hasn’t dreamed for twenty days, and even the Poet can’t help. Dreaming consolidates the Prince’s memories and restores his logical systems. This packs a lot into a few pages and brings to mind some of Robert Silverberg’s later works. Brilliant.

Many of the new stories are about robot or android relationships with humans. In ‘Prototype’ by George Cotronis, a cyborg guarding his absent owners’ home after a nuclear apocalypse forms a bond with a young girl who breaks in looking for food.

‘Demeter’s Regard’ has a male member of a generation ship bound for Kepler 186f who prefers the AI Demeter to anyone else aboard. It’s Demeter’s job to keep the crew happy over a long voyage in which most will live and die aboard the ship working for an aim whose fulfilment they will never see, namely reaching the new planet. ‘Humans need to believe that their lives have meaning.’ Indeed.

More disturbing bonds are forming in ‘Persona Ex Machina’ by Jeff Deck. Tessa is an AI teenage girl persona designed to predict the shopping habits of young American ladies with VR trips to the mall. Her caretakers are Cammy, who thinks Tessa may have a soul, and David, who is obsessed with her teenage body. Men! Honestly, they’re just brutes in human form.

In ‘The Perfect Reflection’, Christopher M. Geeson gives you glimpses of a whole society by focusing on a smart mirror in a nightclub. The mirror photographs your face, improves it with technology and reflects a lovely image back at you. The nightclub is frequented by ordinary people, for the Perfects who can afford it really do have perfect features thanks to cosmetic surgery. So when a Perfect goes after your girl, what are you gonna do? Great story.

I’ve read at least one yarn about androids caring for the elderly before and it could well happen. ‘Owen’ by Bruce Coblen is an excellent contribution to the sub-genre. Automated Caregiver ON12-18-28 looks after Ellen Reiner, a very old lady but she’s not grateful and wants to die. Touches on some ethical issues relevant to our geriatric age.

Sexbots are at the other end of the spectrum from Carebots. In ‘The Geisha Tiresias’ by Rob Hartzell, some people have uploaded themselves to a data collective and operate love robots for the company. They are losing their individuality, becoming a collective consciousness but still dutifully work the geishas, who are companions as well as bedmates. There wasn’t much of a story here but the idea was fascinating.

‘I, Coffeepot’ by David Sklar has a team of computer experts working together who adjust their coffee-maker in various ways to improve it, including voice recognition so it will make the right blend for each individual. Standing before it, they ponder the difficulty of making an AI self-aware, unaware that the coffeepot has become so. Then someone brings in an antique samovar that contains a genie. I loved this one.

Also great is ‘She Swims’ by Claire Allegra Sorenson. 2B88JPU39X is a low-level trash collecting bot in south San Francisco, a Garbot. Every bot has a purpose and hers is to ‘optimise the daily collection and disposal of street trash’. But 2B is slower than the others because she gets distracted by beauty and is marked for possible recycling. A lovely story.

One of my pet hates is stories with first-person narration that withhold the lead character’s name but there turned out to be a good reason for this in ‘Daddy’s Girl’ by Eleanor R Wood. Young Miss Landry and her mother are poor because the entire world economy has collapsed. Before that happened, after a near-fatal accident, daddy had his consciousness uploaded into an android. Now it’s broken, stored under the stairs like Harry Potter and they can’t afford to mend it. His daughter’s dream is to fix it herself, so she works, studies and dedicates her whole life to the task. Another touching tale.

I took this book for review because I was interested in reading the classic tales and I enjoyed some, but many are dated. Still fun, in a way, but not much to offer the modern reader. The new stories specially selected for the anthology are the ones that shine. The mixture of both is an excellent idea and I liked the biographical information at the back about the authors. It’s also a nice artefact of a book for the price, well-designed with hardcovers and will surely add quality to your zoom background. Recommended.