For those who don’t know, Leigh Brackett (1915-1978) was a skilled SF author and Hollywood scriptwriter, credited for detective noir films ‘The Big Sleep’ (1946), ‘The Long Goodbye’ (1973), the western ‘Rio Bravo’ (1959) and her last, not quite completed, ‘The Empire Strikes Back’ (1980). Not bad for a woman in a tough period for being recognised in both industries, although her name made people think she was a man for a time. 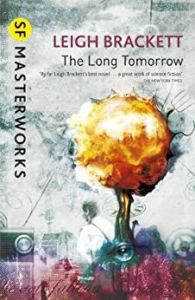 ‘The Long Tomorrow’ was originally released in 1955. The back cover introduces the scenario from the thirteenth amendment to the Constitution of the United States which states no community can be bigger than a thousand people or 200 buildings. No cities, just towns. That isn’t obvious from when you start reading just heavy reveals. The people most adapted to such a regime are the Amish or Mennonites, old and new. We view this life from New Mennonites teenage Len Colter and his cousin, Esau, who are slowly reaching adulthood and seeing an atrocity where a visiting trader is stoned to death.

Esau had stolen some books and a radio after the trader died, which he shares information with Len and realise that the town of Bartorstown might be the place of freedom. However, Esau makes a slip to his father and the goods are retrieved and the radio, actually more like a walkie-talkie which they don’t know how to work properly, is destroyed. They are both physically flogged by their fathers and, when they face a public whipping, they flee, not west to where Bartorstown is but east, figuring the river will make it easier to travel there.

However, they end up at the river town of Refuge, taken in temporarily by the local judge, both having affection for his daughter, Amelia, which creates a rift between them and the judge forces them both out. They also work for the local warehouse owner Mike Burdette, who lets them stay there but they also don’t want to stay together. Burdette wants to open a fifth warehouse and this is, a third way through the book, that we discover why there are no cities principally because they were congested but the real reason was because of a nuclear strike. I did wonder how they could enforce this towns only rule and Leigh Brackett reveals its mob rule.

The trip across America is more of an emotional journey than with any significant trouble, mostly because their host, Hostetter, is careful. When you consider that if they are caught, they would be killed, that would pretty much end the story.

How much to say about Bartorstown? If you try to leave, they will kill you. They need to guard their secrets. Again, quite wisely, because they would be killed themselves. On some levels, Brackett underplays this for the time period she wrote this novel so have a think about what she writes for these hidden levels. She certainly plays up the fear of nuclear reactors that was about at the time.

The rest is largely spoiler but Len and his new wife, Joan, becomes disillusioned by Bartorstown, and work out a way to flee. In some respects and, looking with modern eyes, I think Brackett had to squeeze the end of the story into a couple chapters than to see this develop. Its far easier to see Len get disillusioned but why Joan, an inhabitant of Bartorstown, get so.

As a dystopic reality, Brackett doesn’t hold back on any punches and 67 years later, this is still a pretty scary reality to live in. Subjectively, you would have to wonder how it could survive so long as it has done. I mean, no matter how you divide towns up, slowly some of them must surely merge, simply from population growth and people are likely to change away from killing dissenters. We aren’t given much history of the reality to work out the timeline to know how long its been going on, although certainly several generations. Whether the rest of the world has also gone that way can only be imagined.

Brackett as a storyteller gives incredible depth with her descriptions and makes the book a pageturner and worth your attention.