Arlyn Albainal was very surprised to be named executor of his cousin Xandra’s will. Arlyn hadn’t been Xandra for years and surely would have noticed his own death. In the eyes of the world, Xandra had simply vanished and a cousin had appeared to continue the family business. Looking back, perhaps faking his own death would have been wiser. The summons from the White Court can only mean one thing, that they have discovered the Godstone.

Sealing away the Godstone, his last and greatest, experiment, had cost him everything. His mind, his power and even his name. To save the world, Arlyn and his friend and healer, Fenra, must find a way through the machinations of the White Court and do what the legendary Xandra could not, destroy the Godstone and save the world. 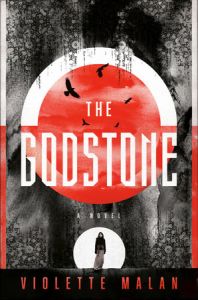 On the surface, ‘The Godstone’ is another fantasy series with a magical McGuffin so powerful it could destroy the world being pursued by opposing factions. There is a mysterious mentor and a helpful magical artefact, a battle hardened guardsman and a pragmatic healer. These elements could equal any number of novels or roleplaying game scenarios. What elevates this novel beyond the generic is the characters and the world.

At one end of the Road is the City where life is more technologically advanced, though still the quasi-medieval of a fantasy novel, than the outer sections where the paved Road has become hard-packed earth. Anyone can travel the Road and move between the towns and villages and the City but only mages, known as Practitioners, notice the changes to clothes, transport and the like. To a non-Practitioner, everything has always been the way that it was and has become. These changes are called ‘Modes’ and, at first, I thought they were like the shadows in Roger Zelazny’s ‘Chronicles Of Amber’ series.

Amber’s shadows are actually parallel worlds that the main characters can move between by using their powers to add or subtract details until they reach the world that they want. One step and the grass is a little greener, another and the sky is more purple, with each step bringing you to an entirely different parallel world. Malan’s world in ‘The Godstone’ is different. Instead of each variation of the world being an entire parallel, it’s more like slices of difference across one world with only the Practitioners being aware of the differences. You step from one slice into another and don’t even notice your trousers becoming breeches or the Road losing its cobblestones.

The story is split, mostly, in two, with the perspectives of Arlyn and Fenra.

Arlyn suffers from what I interpret as depression and Fenra is his healer. While having a magical cure for a mental illness is a wonderful dream, what I loved even more is the pragmatic way it is described and experienced by the characters. Rather than a hand waving malaise or a fit of ennui, Arlyn’s depressive episodes are portrayed as physical illness with physical symptoms that can be managed. Without Fenra’s healing, he would fade into unmoving apathy but with her help can live his life.

For me, it is Fenra that carries this story. Arlyn created a magical doomsday device and basically shoved it under the bed when he couldn’t control it. Fenra is caught up in the consequences of the choices Arlyn made as Xandra and her loyalty does not falter even as her friend’s past life is slowly revealed. Arlyn’s perspective gives insight into the past and the reasons for how things turned out. Fenra gives a wonderfully pragmatic outlook that absorbs Arlyn’s exposition and then does something about it.

I stumbled over ‘The Godstone’ for a couple of days before I learned to not read when I was sleepy. There are so many details that are dropped in casually early in the novel without much exposition at the time that some focus is required. Focus is rewarded however with a wonderfully realised world that I hope yields further adventures. This book does wrap things up nicely enough that it could be a standalone novel. My one criticism would be that the second half of the book begins to feel rushed which leads to a sudden end.

The world definitely has potential for more stories to be set within it and, while Fenra is definitely a character that will find further adventures, I would anticipate a linked story rather than a direct sequel in the manner of Iain M. Banks ‘Culture’ novels. ‘The Godstone’ definitely has enough fantasy tropes to be enjoyed by fans of that tradition, though the fast pace of the adventure might be stressful for those used to breaks for elevenses and second breakfasts.