Oddly, this is my first time in watching the 1981 ‘Dead & Buried’ film. Mind you, with 4 audio commentaries, it’ll be interesting to see if that can be maintained. Considering the promo points out that it’s made mostly from the people who made ‘Alien’ in 1981, basically Ronald Shusett and Dan O’Bannon writing the screenplay plus Stan Winston doing the effects. A little research reveals it was caught up in the British video nasties which explains a lack of TV showings.

One disk is 4k Ultra HD, the other standard blu-ray with the same contents and hidden behind the booklet, the CD soundtrack. The box is in a boxcover with a hologram cover. 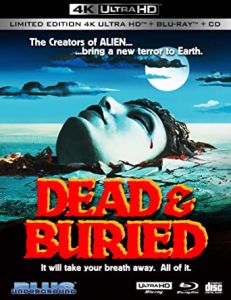 Now, let’s be careful how far I can go without spoilers. The opening will almost send you to sleep as a cameraman on a beach is approached by a girl at Potters Bluff (contrary to what you read elsewhere, ‘Potters’ does not have an apostrophe), proposed to and then gets burnt to death for his trouble. That should make you jump. Some of the local townsfolk seem determined to regularly kill off tourists regardless in gruesome ways.

Local Sheriff Dan Gillis (actor James Farentino) has to unravel what is going on, along with making sense of the local mortician, William G. Dobbs (actor Jack Albertson) making light of things. Which is good because much of the violence is actually done in the dark. If ever there is a criticism, there is too much dark and a gauze to make everything darker in the sunlight which the new format doesn’t change. There is also a touch of zombie resurrection with a touch of snuff movies as the townsfolk record their own activities.

Gillis’ wife and teacher, Janet (actress Melody Anderson) is also planning to do a class on witchcraft, much to the distaste of her husband.

The ending is not something you would expect and even after 40 years will stop you in your tracks as nothing is what you think.

This is definitely not a Science Fiction film, just horror. I can understand why it gained a ‘nasty’ reputation but so much of the film is hidden in darkness that it is tame by modern day films level of violence. It is Stan Winston’s realistic special effects that will make you jump but more of that later.

There are 4 audio commentaries and I’ve had to miss the dark moody night for later evening and space them out so I don’t burn on too many showings a week. Humble apologies for taking so long with this review.

The first audio commentary has David Gregory from Blue Underground keeping director Gary Sherman company and interviews him about the film and how the company backing them changed three times in the background. Noting anything interesting. It was originally supposed to be a black comedy. Oh there is none or little red in the colours in the film.

The second audio commentary is with co-producer/co-writer Ronald Shusett and his actress/wife Linda Turley with David Gregory from Blue Underground. Shusett explains that he and Dan O’Bannon rewrote the original script so completely that they had the scriptwriting credit and with the success of ‘Alien’ had no problem getting the green light on this film. It’s very weird, but considering the success of ‘Alien’, this is the first time I’ve heard Shusett speak, not realising he has a very nasal voice.

The married couple fill in the blanks each other can’t recall which is a nice balance. Shusett gives some insight into ‘Alien’ along the way although this one was written first. Stan Winston was the solution guy for the effects aspects. Shusett wasn’t a horror or SF fan when young because he was terrified of them. His analysis of the film’s flaw and not selling the fact that the townsfolk were zombies rather than part of a sect is probably right, especially as he points out a reveal that didn’t have the right impact because, at the time, most of the cast weren’t recognisable faces.

The third audio commentary is with director of photography Steven Poster with David Gregory from Blue Underground. The defused look of the film was intentional and he explains how a lot of the look was achieved. Techno-lovers are going to love this commentary, more so as they were using state of the art camera equipment that had only been recently made. Poster explains he was more intuitive in his early career and wants to capture that feeling again later in his career.

The fourth audio commentary is with film historians Troy Howarth and Nathaniel Thompson is an up-to-date chat because they know this edition has the soundtrack CD. Initial viewing was low but the plot was played down as well, for obvious reasons now. The novelisation was also out long before the film. If you’re ever curious how the Americans say some of actor and production people names, you start paying attention.

I was right about one thing. Spreading out the watching of each audio commentary because, no disrespect to the people, watching this film again and again so close together shows an element of stamina.

‘Behind The Scenes Of Dead & Buried (& More) is with director Gary Sherman runs at 33 minutes. When the film was made they left a camera out for anyone to take footage and got 15 hours which they reduced to half an hour here which he and cameraman Stephen ‘Stevie’ Coaster talk over identifying people and stirring memories. Totally unique, filming for 4 months and all enjoying themselves. Sherman raised Robert Englund’s acting profile prior to the ‘Nightmare’ films.

Running at 4 minutes, ‘Dead & Buried Locations: Then & Now” shows how things have changed in the town they filmed in. The spookiest thing is that in 40 years, things have stayed the same.

‘Murder, Mystery And Music – Interviews with Director Gary Sherman And Composer Joe Renzetti’ runs at 15 minutes. The latter is an Oscar winner for ‘The Buddy Holly Story’ in 1978 before scoring this film. Watch until the very end credits.

The 13 minute ‘The Pages Of Potters Bluff With Chelsea Quinn Yarbro’ has the author discussing how she got the job of novelisation, not only because she could write creepy and fast but the publisher was a fan of hers. Even so, she had to correct things like racoons don’t snarl and there was a lot of difference between visualising with words than film. I suspect this also explains why scriptwriters rarely make good novelisation writers. Oh, the novelisation was in the New York Best Sellers list at position 11 for 2 weeks.

Probably the biggest nugget is an 18 minute discussion with Stan Winston from 2003 about his career up to that point, winning an Emmy for special effects on his first TV film, ‘Gargoyles’, and then moving into film where he had the opportunity to bring horror up from its B-status. He also explains that this was helped enormously with ‘Alien’ preceding him. At this point, Winston was also working mostly alone so this is a workfest that he was very proud in achieving from the needle in the eye to rebuilding a face from skull up and it was his hands doing it.

‘Robert Englund: An Early Work Of Horror’ was recorded in 2003, runs at 13 minutes, touches on his early character work but mostly focuses on ‘Deathtrap’, the original name for this film. He got his part here for having a particular type of face and it becomes pretty obvious that he enjoys special effects. One can only hope that 18 years later, he finally managed to get a copy of the poster.

Finally, ‘Dan O’Bannon: Creating Fear’ interviews the writer, again back in 2003, for 14 minutes. He doesn’t like the name ‘horror’ films per se and regards them as ‘weird tales’. His summing up that such films need the right atmosphere at least explains why I preferred and had to wait for dark nights in the summer to watch the film 5 times over. O’Bannon also explains he only doctored the script by director Gary Sherman wanted his name on the poster. Remember, ‘The Writers Of Alien’ thereon would ensure more bums on seats.

There’s also 3 theatre trailers and posters and assorted stills and such from the film.

Oh, the third disk is hidden behind the booklet. That one is a CD of the soundtrack. The 17 track soundtrack 44½ minute CD looks like an exclusive to this release. As with the film, the opening track, ‘Welcome To Potters Bluff’, plays passively in good jazz tones to beguile you with normality and then makes you jump at the end. It’s a practice that seems to have gotten lost or deemed too clichéd in recent years but is still effective in making you sit up in your seat, even when the music is isolated from the film. The odd track towards the end has touches of Glenn Miller’s ‘In The Mood’, to highlight a darker mood. The final two tracks are bonus tracks ‘Sentimental Journey’ and ‘And The Angels Sing’ in their original format.

The 20 page booklet is odd. The 14 page article by Michael Gingold, ‘Avco Embassy Pictures: The ‘80s House Of Horror’ is just that. It’s more a history of the horror movies of that decade with ‘Dead & Buried’ only getting a mention on the 12th page and wasn’t well received by its production company being deemed too intelligent for a horror movie. Not that they didn’t have any faith in its director, Gary Sherman’, because they let him run with ‘Vice Squad’ and firmly backed its release. Considering ‘Dead & Buried’ was considered a ‘video nasty’ in the UK and banned for some while, perhaps a better history could have been done. Having watched the film, I do think it was the realism of Stan Winston’s effects that sold the realism.