‘Swords & Steam: Short Stories’ is another big collection from Flame Tree Publishing that mixes old and new stories, this time in the sword and sorcery and Science Fiction genres, an odd mix but it works. The stories are arranged in author alphabetical order, as good a way as any, but I’ll sort them into old and new and pick out some highlights. We’ll begin with the new. 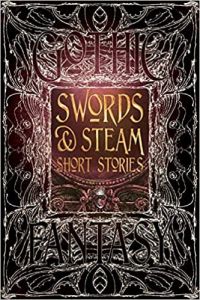 ‘Little Healers’ by Andrew Bourelle reads like an old story with a rich vocabulary and point of view switches between two characters, but it’s brand new. Late one night, Jessica watches in horror as husband James exhumes the dead body of their son, Henry. James is an inventor but when Henry became ill he could find no cure. Or could he? Well written with some true horror to finish. A terrific opener for the anthology.

‘Pax Mechanica’ by Daniel J. Davis has Romans invading Britain with a steam-driven tank. Unfortunately, it gets stuck halfway across a river and the Celts who had run away are emboldened to attack again. A solid adventure story and I love steampunk Romans. A novel would be good.

‘Dear George, Love Margaret’ by Amanda C. Davis is a tale of automata and a lonely wife. The husband has gone west to seek his fortune and left her with a bronze companion. It’s told in epistolary fashion, her letters to him, and slowly reveals the truth. Amusing conclusion. ‘Dressing Mr. Featherbottom’ by Amy Sisson has a similar theme but Anabella Frostwich starts out as a little girl by dressing up her mechanical companion and then gets rich.

‘Advantage On The Kingdom Of The Shore’ by Kelly A. Harmon is a clever story about a priest and a rich lady who both want the same sword at an auction, for it is magical. Having just read ‘Stormbringer’, I was in a magic sword mood and this satisfied the yearning. I’m not sure a woman could have lived such a life in old Italy but it was well done all the same.

Despite the stories being arranged alphabetically by author rather than theme, coincidence put two war stories side by side and they were both excellent. ‘The Crime Of A Windcatcher’ by B.C. Matthews is the tale of an innocent man being lashed slowly to death for attacking the captain of a sailing ship, whose word is law. Windcatchers can control the breezes, in a limited way. A gory story that makes you feel the pain of that cat o’nine tails. It’s followed by Angus McIntyre’s ‘War Mage’ featuring trench warfare with wizard powered tanks. Eight mages sit inside a steel hull and transmit a bubble of magic energy which can be released in bursts of thaumaturgic power. The strain can kill them and they are conscripts. Getan Absyne might have a way out. Here’s an original slant on the folly of World War I.

In ‘Spectrum’, a colony ship crash-lands on its destination planet when an electromagnetic storm fries all its circuitry. Years later, Neha, who could see the storm because of an odd talent, is involved in a mission to warn the next colony ship of the danger by flying a steampunk plane into the upper atmosphere and signalling the approaching vessel. Solid Science Fiction with a neat twist. Author Liam Hogan usually delivers the goods.

Author Zach Shephard makes stories out of bad puns. ‘Eli Whitney And The Cotton Djinn’ is an amusing example in which inventor Eli accidentally conjures up two Djinn who are dedicated to killing each other. Eli plays along hoping to get some wishes granted. On the downside, the cotton gin led to greater demand for labour, more slavery and, ultimately, perhaps, the American Civil War. However, this silly yarn is great fun.

On to the old stories. Some of these are not easy reading as our English prose style has changed over time but they are worth the effort. ‘The Grove Of Ashtaroth’ by John Buchan is set in colonial South Africa. Lawson has made his fortune and builds himself a fabulous house in the perfect setting but his best friend finds him deeply unhappy. This tale of old gods lurking in forgotten corners of the world is a mite slow but worth reading to the end. Buchan is most famous for ‘The 39 Steps’.

‘Horror Of The Heights’ by Arthur Conan Doyle explores the possibility of life-forms in the clouds as an adventurous inventor and pilot seeks them out. The detail about early flying machines and conditions is probably accurate, Doyle was of a scientific bent and the creatures are ingenious and believable. I wonder if this gave Heinlein the idea for ‘Goldfish Bowl’, admittedly a different take on the speculation.

‘Undine’ by Friedrich de la Motte Fouqué is a long piece about a beautiful water sprite who captures the heart of a knight. Her circumstances are complex and, although it drags on a bit, you finish it because you have to know what happens next. I guess that’s the essence of a good story. First published in 1811, it’s full of weeping and wailing, a reminder that men were emotional before the British invented a stiff upper lip.

‘The Raid Of Le Vengeur’ by George Griffith is a tale of submarine warfare between Britain and France. Both sides come up with a devilishly clever submarine at the same time but which one is the best? A bit of fun.

‘The Man Without A Country’ by Edward Everett Hale was a better sea story and a much better human story. Philip Nolan is the man of the title. He became involved with Aaron Burr’s failed machinations in 1807 and dared to say in court that he hoped never to hear the words ‘United States’ again. The judge sentenced him to a life without a country. He served on ships but was never allowed any news of his homeland or to set foot on it again. An oddly moving story of a decent man making the best of a bad job.

‘The Artist Of The Beautiful’ by Nathaniel Hawthorne is the sad tale of a dreamer who wants to make great art instead of money. Fool. ‘Skulls In The Stars’ by Robert E. Howard features Solomon Kane, not his best character, in a fairly routine encounter with a monster. ‘Rip Van Winkle’ by Washington Irving is a classic that’s handy to read for ticking a box on your ‘must read’ classics list.

The collection closes with two by Jules Verne, one candidate for the title ‘Father Of Science Fiction.’ ‘A Drama In The Air’ is about a lunatic leaping aboard a balloon at the last minute and taking the unfortunate aviator too high.

‘Master Zacharius’ is a fantasy about an old Geneva clockmaker, the greatest, whose timepieces start going wrong. Pride comes before a fall. Both of these show the author’s extensive knowledge of the science of his day and both hook the reader and get very exciting near the end. It’s obvious why Verne became so popular. His works did not increase slavery or lead to war but have indubitably led to the creation of several classic B-movies starring Doug McClure and for that I am grateful.

These old and new mixed collections from Flame Tree Publishing are good value. They offer a chance to read the classics and also promote modern authors. The extensive biographical notes at the back of the book can lead you on to other works by writers who stir your imagination. Like any big anthology, this is best taken in small doses but it’s well worth a look.