Last year, I reviewed ‘The Joy Of Chemistry’ and this year, it’s their book ‘The Chemistry Of Alchemy’ by Cathy Cobb, Monty L. Fetterolf and Harold Goldwhite. If you thought that this would be purely a history of alchemy, then you’ll be in for a surprise. Like their other book, this is more of a practical chemistry guide so you can try out some of the experiment that alchemists tried in their pursuit of gold and transmutation of elements, as well as their other discoveries. Please read their safety guidelines carefully and follow them for your own protection. As the book is aimed at the American market, some of the experiments use old American coins in some of their experiments. If you’re going to repeat these in other parts of the world, find their alloy equivalent or something small made of the same material. You might even be lucky to find a coin shop selling the right age of American coin. DON’T try it with anything else!

For those who don’t know, alchemy is actually an Arabic word and the forerunner of chymistry or chemistry. The authors say that their background information isn’t likely to be comprehensive and much of their choices are from the western world.

Proper alchemists weren’t exactly fools with their pursuits and often were applying what we see as normal experimental techniques. It’s nascent chemistry without understanding all the rules or recognising all the elements and compounds. Amongst the illustrations, was a picture of a condenser which I would have thought was pretty sophisticated and a primary tool for distilling crystals from liquids. The transmutation of elements was not exactly a fool’s errand. Following the experiments here, seeing a compound changed into something else, including a golden colour in transit, must have made them believe this was how gold was formed in the first place and why alchemists sought it. Where they couldn’t, the fraudsters invariably stepped in and cheated. Indeed, the alchemists who were having difficulty making gold for their royal masters also had to depend on such trickery or face death. It’s hardly surprising that alchemy has gained such a bad reputation over the centuries. However, as this book shows, the odd bit of good did come out of it.

Considering how difficult it was, outside of monks, to make copies of books, not to mention the Vatican preferring to rely on Aristole’s authority than to take a chance on any scientific development, even the more dubious aspects of alchemy. Roger Bacon managed to get some records saved, despite his own imprisonment on the subject, and enabled its history to be established by having other books translated from Arabic and Greek for when the printing presses became available.

What I found most significant on page 86 was the significant compounds of ammonium chloride, sodium nitrate and sodium bicarbonate aka baking soda were regularly being used. Mind you, the most that they were regularly doing was extracting mercury or cinnabar, oddly a name the authors didn’t use, from rock ore. When you consider how certain ores went through a variety of colours, including gold, when smelted it’s no wonder the alchemists thought that they had seen transmutation and wanted to slow it down to extract gold.

Oddly, Paracelsus led the way in medications, mostly by choosing not to use the other treatments, including arsenic, available at the time and what he did use at reduced doses. After his death, his followers, not realising this, thought more was better and had more deadly results. In many respects, Paracelsus was a con man but had inadvertently realised the body could repair itself if he left well alone.

Alchemist Johnan Glauber needing a cure for constipation was told to dry a particular spring water which worked as a laxative, discovered it contained what later became sodium sulphate. A compound relative, magnesium sulphate, you might be more familiar with when called Epsom salts. Glauber also improved the air furnace, moving it away from bellows and making it a lot hotter simply by improvising to cut down on the smell it gave off. Likewise, without later Johann Bottger and Ehrenfried von Rschirnhaus, we wouldn’t have had porcelain who both advanced the furnace even more.

Don’t forget that Isaac Newton and Robert Boyle were alchemists and influenced by George Starkey before they made their own discoveries.

Looking over the experiments, I have a feeling a lot of parents are going to help their chemistry inclined children with them. About the only one that I would suggest needs a little tweak is the final experiment based off Robert Boyle’s experiments and that the 20 clear plastic cups get a label or marked with felt tip to help identify what’s in each one. Other than that, they are all explained well and on several occasions a demonstration of the patience you have to employ to create some chemicals before you are able to use them. I would also recommend reading the entire book first before trying them out as it’ll remind you why you’ll be keeping parts of some experiments to use later.

As noted above, some alchemy was still really elementary chemistry, even if those involved didn’t realise it at the time. Seeing the logic they applied, you can understand why most of them sought to create gold. What amazed me most was how some discoveries are still used today. This book was quite an eye-opener for me and although the alchemists were invariably on rocky ground a lot of the time, it was a foundation of ideas and interest that became an odd bedrock for modern chemistry and definitely deserves your indulgence. 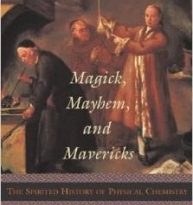