‘Age Of Iron’ is a brutal and bloody adventure novel set in Iron Age Britain from the pen of journalist Angus Watson. Somehow the novel has qualified as ‘high fantasy’ according to Orbit’s pre-release publicity, but the novel barely contains any magic or fantastic sights at all. This shouldn’t put you off reading it though, because Watson has delivered some brilliant characters and a taut, exciting story. This is a story set in Britain before the Roman occupation. The Romans play a role off-stage in this book as the threat over the horizon. However, Iron Age Britain has more than its fair share of warring factions to contend with, especially the bloodthirsty King Zadar.

Dug, a wandering mercenary, gets caught up the massacre of a town by Zadar’s troops and ends up on the run with Spring, a young girl who ran with another mercenary band, and Lowa, a female Germanic archer who defied Zadar and incurred his wrath.

Zadar’s wrath, incidentally, really is brutal and spearheaded by a sadistic druid named Felix. Children are maimed and sacrificed. I have to admit I found some of the descriptions of this in the book’s opening 50 pages or so pretty hard to take. However, the blood-letting does demonstrate how disposable life was in Iron Age Britain and gives our heroes something to fight for. There are also good druids. Drustan is an older druid teaching his young ward, Ragnall, the ways of the world. The druids aren’t quite wizards, but there is a hint of magic about them.

As Watson points out, historic records on what the Iron Age was like are pretty sparse. He therefore has fun with the countryside and towns. For example, Mearhold is an interpretation of Glastonbury complete with tor and festival. Naturally, the festival is described as ‘not being as good as it used to be’. Watson also plays with mythology with the myth of Atlantis told in the book as the myth of Tans Tali. Why he’s changed the name into an anagram though isn’t really clear, presumably the threat of Rome would be as real as the myth of Atlantis. The fondness for anagrams also stretches to incorporating other fantasy characters, see if you can spot ‘Nanoc’.

Overall, though, it is the characterisations of Dug, Spring, Lowa and Ragnall being real people and likely heroes that shine through. They contrast well with the likes of Zadar and Felix, demonstrating both kindness and weakness in an unforgiving world. I found myself reading on because of these characters and felt rewarded by doing so. At 523 pages, the novel is long, but actually zips along from one dangerous moment to the next. It’s an intelligent and exciting page-turner.

Putting to one side quibbles with the publisher’s blurb about the book, there are no dragons here, ‘Age Of Iron’ is a great read that I thoroughly enjoyed. It is the first part of a trilogy, but has an ending that makes it work as a standalone novel, which I heartily applaud. The acid test is would I read the next one? Yes, absolutely. Bring me my hammer, bring my beer, bring it on. 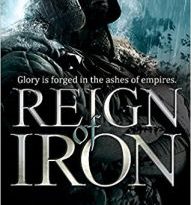 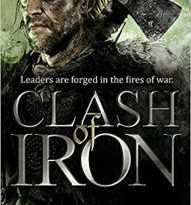