There is a huge catalogue of books that have the premise that there are races living amongst us that are not totally human. They keep their heads down and cover their tracks as they believe that if they were discovered there would be an all-out campaign to exterminate them.

Werewolves, vampires, fae creatures and aliens have all been treated to the isolation model and many plots hinge on the need to keep it that way, especially with the advent of modern systems and technology. It is harder to remain unseen now than it was in the Middle Ages. ‘The Book Eaters’ is Sunyi Dean’s debut novel belongs among them. 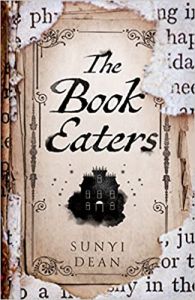 As the name suggests, these people subsist by eating books. Paper, ink and the words are all they need to sustain them. Ingesting books means digesting the ideas within them. There are a number of families, each living in an isolated sprawling gothic mansion. Devon Fairweather’s home is secreted in the Yorkshire Moors and the situation is very misogynistic. Female births are much rarer than male so she has been brought up in a mostly male household but groomed to accept her place as a breeder.

When she is eighteen she is to be married into another family with the intention of bearing a child as soon as possible so she can be passed on to another family. Two children is usually the limit to female fertility. To prepare for motherhood, she is fed romantic fiction and fairy tales, more adventurous books are reserved for boys to eat. While Devon is not happy with the situation, she doesn’t have a choice.

After her first marriage, she gives birth to a highly prized daughter and is able to spend three years with the child before being forcibly parted from her to undergo her second marriage. Her second child, Cai, is an abomination even amongst book eaters. He is a mind eater. His nourishment are the memories of others. Mind eaters don’t kill their victims but leave them in a mindless state. They do retain the memories of the person they fed on. For adults this would be useful, but Cai is a young child and the multiple memories can cause complications.

Knowing that she will be parted from her child, who will probably be killed, Devon is already planning her escape when Cai kills his father, flight is precipitated.

The novel is told in two strands. One follows Devon and Cai in their attempts to survive in the human world and find the missing book eater family who know how to make a drug that will stop Cai’s hunger for minds. Alternate chapters trace Devon’s path to the predicament she now finds herself on. It is these chapters that illuminate book eater society.

The structure of Devon’s life before she goes on the run, she is being hunted by Knights, the book eaters enforcers trying to keep the race hidden, is well thought out and the action well-paced. It is an excellent debut novel deserving of a sequel. The only question I have, is what did the book eaters eat before print and paper were invented?