‘On Spec: The Canadian Magazine Of The Fantastic’ is still going. The latest issue features a mix of fiction and non-fiction but I’ll focus on the former, which is most of the content. 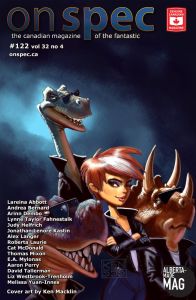 ‘Fire Flows Downhill’ by Alex Langer has a team of foreigners mounting an expedition to take over the dragon whose power makes the state of Breshaar ruler over all. None can resist the mighty dragon and the occupants of other states must bow to terms and conditions imposed by the Breshaari, backed by the dragon. The rebels are an argumentative bunch and may have different ideas about their mission. Solid story and imperialism is bad.

The toaster has a deep voice, like James Earl Jones’, and it speaks! “Bring an umbrella, it’s going to rain” is the first warning it gives to our heroine. She has a history of psychiatric illness and thinks her medication isn’t working but follows the toaster’s advice anyway. It rains. Other warnings follow and they seem relevant. What’s going on? ‘I’ll Have My Toast With Jam, Please’ by Andrea Bernard is a trip into the downright weird but very enjoyable.

Equally strange is ‘Blister’ by Judy Helfrich. Stanzia’s feelings come out as blisters on her body. She can peel the blisters off and attach them to others, like her husband, who then feels her pain. They grow at an amazing rate so she opens a gallery so the public can see them. This develops in unexpected directions and makes for another engrossing read. I have a weakness for oddball fantasies in a modern setting.

‘Compassion Fatigue’ by David Tallerman features an odd faith-healer called Paul who lives on a university campus and helps people. Healing weakens him tremendously but he has friends who care. The first-person narrator is Zahid, who has an issue of his own, not fantastic, not medical, just modern mundane. Perhaps Paul can help him with that. A nice enough story that probably could have worked fine as mainstream without any fantasy element.

‘Loaner Bodies’ by Aaron Perry has extra-terrestrials who borrow humans for seven years but replace them with perfect clones, right down to the memories. The clones are indistinguishable from the original except that the other people know they are clones. Some kill them. But what if you get along well with your husband’s clone and make new memories? What happens when the original comes back? An intriguing concept well-handled.

‘Botman’s Tale’ by Liz Westbrook-Trenholm is an entertaining sequel to ‘A Midsummer Night’s Dream’ by W. Shakespeare. Bottom and some friends are tasked with fetching a child back to the faerie kingdom from our world but have trouble when the child doesn’t want to go. Humans have developed somewhat in the last few centuries causing unexpected complications. I’m not familiar with the original work but I enjoyed the story even so. Liz Westbrook-Trenholm is this issue’s author interviewee and I like her approach to fiction.

‘Acceptance’ by E.A. Mylonas concerns a lady who can see her future and so knows what will happen to other people, too. The perception is nicely explained as viewing a whole jigsaw puzzle but being able to focus on one part at a time. Unfortunately, her focus shifts at random without conscious control so one minute she’s walking up a hot, dusty highway and the next sat in the park thirty years ago with her husband-to-be. Non-linear time perception has been done before by Captain Sisko and Doctor Manhattan to name but two and is well portrayed here. I was mostly reminded of Silverberg’s ‘The Stochastic Man’, one of my favourite books. There are few wholly original premises in Science Fiction, but the treatment makes a story new.

‘The Yellow House’ by Jonathan Lenore Kastin is surprisingly dark. A nice little girl called Lydia doesn’t want to move house even though her parents tempt her with offers of a sunny life in Italy or Corfu, having decided against a wet life in Ireland. She rebels.

In ‘Quirks’ by Arinn Dembo, Mattie Brown is a girl with powers on the run with her sister, Rachel. Quirks are hunted by the Typicals, normal humans. Mattie can get free food by asking for it. A typical hot dog seller obeys her request as if she’s Killgrave the Purple Man. Other Quirks have even greater powers but they still succumb to the relentless Typicals. Mattie is very focused on naming things and people.

The point of view shifts from first to third person and the writing is immersive. On the surface, this could be described as a hunted X-Men scenario but the author’s style lifts it above that and the powers of some Quirks are mind-boggling.

Along with the fiction cited above, there’s a cartoon, an interview with the cover artist Ken Macklin and another with author Liz Westbrook-Trenholm, some poetry and an editorial. Publishers The Copper Pig Writing Society now distribute through Weightless Books, see link below. As usual, this issue contains a mixed bag of quality short stories and is worth your time and money.