The pack is back in Beacon Hills and ready for action in the new trailer for Teen Wolf: The Movie. Original stars Tyler Hoechlin, Tyler Posey, and Colton Haynes will be returning for the highly anticipated film, which will premiere on Paramount Plus on January 26th 2023.

The trailer opens with eerie shots of the woods and a voice saying, “There’s something that’s brought them back.” It then cuts to a construction site where Dr. Alan Deaton (Seth Gilliam) is told the floor is “pretty unstable.” Alan replies, “They call me the alpha,” to which the other man replies, “Like the dog?” But Alan corrects him, saying, “No, like a wolf,” as we see Scott’s eyes glowing red.

We then see Derek Hale (Tyler Hoechlin) telling his lacrosse-playing son, “If you heal, you can play tomorrow night. You’re my son, but you’ve got to be willing to learn,” as we see Derek’s son exhibiting his healing powers.

Flashbacks of Allison’s death in Season 3 are also shown, with Chris Argent (JR Bourne) telling Scott, “I’ve got a feeling the answers are in Beacon Hills.” Scott replies, “I haven’t been back in a long time,” and Allison is then seen arriving as a mysterious archer, but she doesn’t seem to know who she is. Melissa McCall (Melissa Ponzio) asks, “How do we know she’s really Allison?” and we see Allison pointing a bow and arrow at Scott, asking who he is. Scott says, “It’s me, it’s Scott,” but a distraught Allison can only say, “Scott who?”

The trailer teases the long-awaited reunion between Scott and Allison, as well as the emergence of a new evil in Beacon Hills. Fans of the show won’t want to miss Teen Wolf: The Movie. The film will be followed by the new spin-off series, Wolf Pack, also debuting on that date. 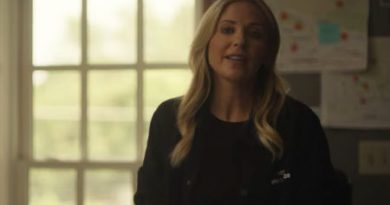