When I was first told that Network was putting the early Anderson black and white series into colour, I thought it might be used for ‘Four Feather Falls’, ‘Supercar’ and ‘Fireball XL5’, which were all 43-minutes-long. Turning black and white material into colour isn’t exactly new, but this is the first time applied to the early Century 21 material. The one major advantage is the number of colour photographs to compare to the computer colour identification.

I wondered when I first heard of this whether it would be all the episodes or just a sampling and turned out to be the latter. No doubt this is to see what the fan reaction is and it’ll be interesting to see if they do full seasons. 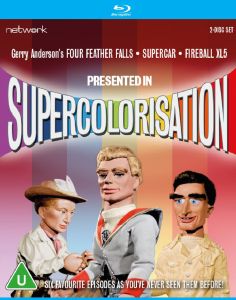 On disk # 1, we have ‘Four Feather Falls’ episode ‘First Train Through’; ‘Supercar’ with two episodes, ‘Pirate Plunder’ and ‘Take One’; and three ‘Fireball XL5’ episodes, ‘The Sun Temple’, ‘The Granatoid Tanks’ and ‘A Day In The Life Of A Space General’. I know something about the latter as it was the one XL5 episode actually recorded in colour as a test for ‘Stingray’.

Without the booklet, there’s no sign of the choices of the other episodes. Watching ‘First Train Through’, it became obvious that the chrome/silver train was an excellent test for metallic texture and does a superb job. One of the establishment shots at the beginning of the story looked a little blurred, but that might be a resolution problem. The same with some tumbleweed for how fine it was in motion. Other than that, it was a quick adaptation to seeing it and the other episodes in colour, so I would classify this as a success. Both newly coloured XL5 episodes had lots of dust flying around and seems to have resolved the earlier problems.

Contrasting them to the originally coloured ‘Space General’ episode, I think Venus’ hair was a little too light. On the whole, though, the colourisation looks like a success, certainly by not losing texture and tone. There’s an artist trick with drawings or paintings to hold them up to a mirror to see them with a fresh eye. Seeing them like this makes me think the same will apply to seeing the full seasons in a new light.

I can’t speak for the booklet because it didn’t come with the advance disks.

The second disk has two nearly two hour long features. The first, ‘You’ve Never Seen This’, has Professor Beaker and Matt Matic discussing an early Gerry Anderson directed 1955 series ‘You’ve Never Seen This!’ and shows one of its episodes in its entirety, the others mostly missing, as we follow presenter Peter Collins looking at some oddities around the UK. An interesting comment is seeing Des Saunders among in the credits.

Very quaint, and you have to wonder if that weird tavern still exists. There’s a repeat of Supercar’s episode ‘Pirate Plunder’ and XL5’s ‘The Granatoid Tanks’ plus a brief intro by Atlanta Shore to show a high definition of the ‘Stingray’ episode. ‘Treasure Down Below’. From the credits, all three voices were by new people, but the men really captured the original voices.

The second, ‘Space City Specials’, notes ‘Fireball XL5’s 60th anniversary with Lt. Ninety and Robert the Robot being educated by Matt Matic in the shadows. This time we see ‘You’ve Never Seen This!’ episode 6 where among the delights is a woman changing clothes 25 times in 5 minutes and being told it took 2½ hours to get ready. Considering the backdrop of this is a man waiting for ‘5 minutes’ for his wife to get ready to go out, raises an eyebrow.

Oh, there’s a viewing of the XL5 pilot episode before moving on and showing ‘Four Feather Falls’ episode ‘First Train Through’, the cast with their puppets, alas no audio finally ‘Fireball XL5’ episodes, ‘The Sun Temple’. This one is obviously a promo piece, more so because it even promotes this blu-ray set and you probably already own it.

I think the colourisation works, but I suspect Network is waiting for fan reaction as to which series to do first based on that. I would bet on ‘Fireball XL5’ myself. We could have done with a bit more on the technical aspects of doing this than Matt Matic’s colourisation machine to work out how long it takes to do each episode.