What happens when some smugglers, swindlers, gamblers and the odd Rebel team-up to conduct a heist on high-ranking figure from one of the galaxy’s most notorious crime syndicates? This is the question posed by Timothy Zahn’s novel ‘Star Wars: Scoundrels’, a book that throws Han Solo and Lando Calrissian firmly into the world of ‘Ocean’s 11’. It’s not unusual for the ‘Star Wars’ novels to magpie from other genres. Last year’s excellent ‘Kenobi’ by John Jackson Miller was a western. Appropriately, for a heist novel, ‘Scoundrels’ steals the premise of ‘Ocean’s 11’ and casts Han Solo, fresh from destroying the Death Star at the Battle of Yavin, in the Frank Sinatra/George Clooney role. Eager to pay off Jabba the Hutt, Han accepts the break-in job from a guy named Eanjer. He shows Han that a Black Sun crime boss named Villachor has a lot of blackmail material kept in a vault in his mansion house, incredibly valuable to the highest bidder. Han, with Chewbacca’s help, recruits a team of performers, security experts and thieves to undertake the job with him. Then, much to Solo’s trepidation, Lando Calrissian is brought in.

This is a good thing, because of the ‘regular cast’ in the novel, Lando is by far the best served. As I’ve said before, ‘Star Wars’ novels work best when they accurately represent the on-screen characterisations. Lando is charming, roguish and every bit the sabacc player we expect. He bluffs his way into Villachor’s organisation, survives a shoot-out and always make time to flirt. Conversely, Han Solo doesn’t feel like Han Solo. For a character who lives by his wits, the slow build-up of the heist plot doesn’t really suit Han’s persona. He waits around a lot, he worries, what he doesn’t do is much adventuring. Unlike Brian Daley or James SA Corey, Zahn struggles to make Han feel like his old self. Chewbacca seems surplus to requirements, too, until someone needs a vehicle piloting somewhere.

The supporting cast begin by seeming a little interchangeable, but Zahn at least gives a couple of them some character development. Characters like Zerba and Bink are well-drawn, but others such as explosives expert Kell is rather one-note. Being Zahn, he can’t resist using one of his old characters and future New Republic nanny Winter Celchu makes an appearance cut-off from the Rebel Alliance.

Every heist story needs a macguffin. In this one, it’s an Alderannian iPad. In 2011, ‘The Simpsons’ featured an episode called ‘The Book Job’. This also brilliantly spoofs ‘Ocean’s 11’ and delivers a satire on fantasy YA publishing. The story of the heist team, as assembled by Homer and including Neil Gaiman, culminates with Lisa switching a USB flash drive. ‘There were two drives!’ she tells Bart. ‘I got the idea from every movie ever made.’ That one line should tell you everything you need to know about the macguffin at work in this novel.

As a pastiche of ‘Ocean’s 11’, ‘Star Wars: Scoundrels’ works OK, but it squanders its lead character. Get Han Solo right and you have a great ‘Star Wars’ story. Sadly, this one doesn’t. However, if you’re a Lando fan, then it’s worth checking out. In fact, you perhaps didn’t need Han and Chewie at all. I enjoyed the book in places, but not as much I would have like to. The last line should make you smile though, even if the rest of the book doesn’t. You may feel that the only valuable thing that’s been stolen is your time. 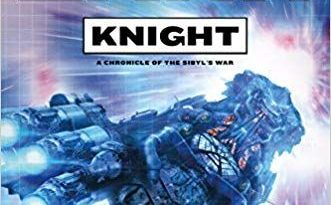 Knight (A Chronicle Of Sibyl’s War book 2 of 3) by Timothy Zahn (book review). 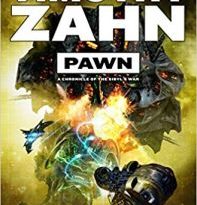 Pawn (A Chronicle Of Sibyl’s War book 1 of 3) by Timothy Zahn (book review).

Pawn (A Chronicle Of Sibyl’s War book 1 of 3) by Timothy Zahn (book review).

Knight (A Chronicle Of Sibyl’s War book 2 of 3) by Timothy Zahn (book review).