Historically, comics have a huge role in developing SF fans. I think many of us have gone through comics, young adult fiction and onwards. Technology lends itself to producing exciting and interactive comic strips. ‘Pulse’ is a pretty good attempt to modernise such an important pick to open the minds of future SF fans. It is available exclusively on iPads and iOS devices via iTunes. Interestingly, an android version doesn’t seem to be on the horizon. At the last count, iOS had about 40% of the tablet/smartphone market compared to 50% held by android. One has to wonder why the publishers would make a decision to roughly halve its potential market. The strips themselves are nicely drawn. The reverence towards old-school 2 and 3 colour strips is obvious and nicely nostalgic. It is interesting to have to try and imagine reading these comics as my eight year-old self would have.

There are four stories in total.

Team M.O.B.I.L.E. Teen-aged kids with naturally high abilities are boosted by a shadowy government organisation to act as secret operatives. This story has the greatest potential to become something great. It borrows heavily from Ridley Scott’s colour palette. The organisation is presented in muted blues and greens, the real world in vibrant golds and reds. This story makes the most of the modern media.

Serpent Wars. This story is set in the eighteenth century in the Americas. Prehistoric giant sea serpents and the gods of South American native tribes are battling each other while humans are collateral damage. Visually, this is a beautiful strip. The washed-out sepia tones fit the subject nicely. Initially, I had problems identifying with the characters, especially the giant monsters. Only time and a few more episodes could tell if this will change.

Dinocorps. A squad of sentient dinosaur soldiers re-awakens in the present day. They have to contend with the loss of their whole world as well as deal with a strange new one populated with monkeys. At first, I thought this would be my favourite strip. Who doesn’t love dinosaurs with big guns? Perhaps this is another story which will grow.

Endangered Weapon B. This is the story which I had the most difficulty with. There is an eccentric scientist adventure chap called The Professor who has a series of eccentric adventures with his eccentric companions while being thwarted by an eccentric group of adversaries in, well, eccentric places. This story felt like it had started on about page 13 of the script and spiralled from there. If you remember ‘The Simpsons’ episode where Poochy the dog was introduced, you will recognise all of the characters here. Imagine anarchic fun but with twice the anarchy and half the fun.

Once again, these are all initial impressions. All of the greatest strips and stories have a slow start and need a heap of character exposition and hence combining the two issues review into one.

The biggest issue is one of substance. I blasted through both issues in a couple of minutes. I can’t say whether an extra story or 20% more length to the existing stories would work better. Once more, I wonder how my eight year-old self would have felt. Money was always tight as a kid. My Dad, another massive SF nerd, saw to it that I always had ‘Beano’ and ‘Dandy’ comics and later ‘2000AD’. All three of these had a larger number of strips per issue.

Overall, this is a great attempt at modernisation of a beloved format. Cost per issue is relatively low and home grown SF in any form is always welcome. Hopefully, ‘Pulse’ will grow to its full potential over time. 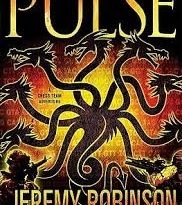