In some respects, Martijn Van Calmthout’s book, ‘Sam Goudsmit And The Hunt For Hitler’s Atom Bomb’ is taking the focus what this book is really about. Sam Goudmit (1902-1978) was renowned for his work in quantum mechanics and, along with George Eugene Uhlenbeck in 1925, the discovery of the spin in sub-atomic particles.

As a Dutch Jew, he and his wife fled Holland from the Nazis, although all but one of his relatives were less fortunate. In the later stages of the war, in 1943, he returned with a US army unit to hunt down German scientists to discover how far along they had gotten making an atomic bomb. 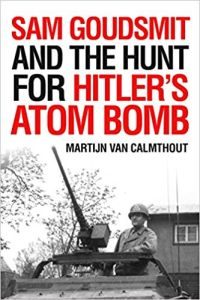 Goudsmit gives much of his mission in his own book, ‘Alsos’, and although I haven’t read it, Van Calmthout covers more information that wasn’t put in there, probably to abide by what was classified and some things Goudsmit had bad memories of at the time. What made Goudsmit useful to the US army was that he didn’t belong to the Manhattan Project so if he was captured wouldn’t have any classified information and that he also suggested checking on his once colleagues to see how far they are gone in their scientific studies in a matter-of-fact way than direct interrogation.

The fact that he could also speak 5 languages was also useful. The Americans also wanted to be ahead of the British in finding out just how far Hitler had got towards making an atomic bomb considering their research into heavy water in Norway.

A lot of the time while Goudsmit was in Europe was waiting for things to be done and then kept busy. What comes from all of this is that there had been some work in making several nuclear reactors but was still at the laboratory stage. The Nazi regime in keeping things segregated stopped progress thankfully because different scientific units didn’t discuss their problems.

If you’re familiar with the allegiances of some of these scientists, you shouldn’t be surprised too much. Walther Bothe accidentally actually hindered the Nazi war effort by saying they needed deuterium from heavy water for tempering nuclear reaction. Probably the biggest thing that could be exploited from their discoveries was the ultracentrifuge for rotating at high speed to separate the uranium isotopes.

After the war, Goudsmit kept himself busy, principally as editor of ‘Physical Review Letters’ which centred on physics. He had a great desire to ensure the facts were shown there first before being blown out of proportion by the normal press. He was also an expert on Egyptian artefacts and wrote about them as well. Something I hadn’t known was Goudsmit was a member of a Robertson Panel commission examining UFOs in the 1953 ordering the air force investigation unit to be closed down after reviewing the evidence. Although in later years, Goudsmit thought they were a bit hasty, he didn’t change his opinion.

I should point out that Martijn Van Calmthout is Dutch and was translated into English by Canadian Michiel Horn.

This was a fascinating book and although I have to admit to not knowing about Sam Goudsmit before, I certainly did by the end. A great history lesson.