I must admit I have a nostalgic fondness for good old-fashioned Science Fiction with spaceships, lasers, explosions and daring-do. Perhaps it was all the Flash Gordon I used to watch at the Saturday morning cinema. Anyway, ‘Quick-Kill And The Galactic Secret Service’ brings it all back, although it’s been updated to reflect the technical developments since the middle of the last century. 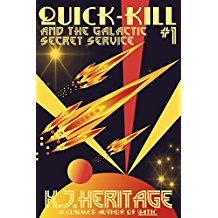 The action is taking place on the backwater planet Plenty which we are told is ‘the most unfortunately named world there ever was.’ It has just one city called Amsterdam with a population of about 30 million people who would rather live on a different planet. In this dead-end place, Quick-Kill Jane has progressed from an orphan street urchin to be a rather accomplished assassin. It’s her reputation that brought her the latest contract to kill someone.

In the very first sentence, Quick-Kill is shooting someone she’s been hired to kill. A rather routine job for her, so she’s taking her time and enjoying herself. Her target, a rather overweight criminal called Rollo Barla, isn’t enjoying the experience as much as she is. Wounded and unable to run anymore, Barla has one last trick up his sleeve (metaphorically speaking) which, unfortunately, doesn’t stop Quick-Kill Jane from completing her assignment but does have profound consequences for her.

That one little event has now brought Quick-Kill Jane to the attention of the galaxy’s organised crime big-wigs for all the wrong reasons. With an excessively high price on her head, everyone is out to kill her using any available means. It’s during this flight from would be killers that Quick-Kill is somewhat coerced into joining the Galactic Secret Service.

As part of her induction into the service, she’s assigned a new body which happens to be a change of gender. Apparently, its standard practice to give the agent a completely new body and switch the gender. In case you’re wondering, the old body was retired with a well place blaster shot so there’s no going back. It’s not what Quick-Kill would have asked for as she was quite happy being Jane with same sex partners.

That just about rounds off Part 1 which is fast-paced. There’s lots of action and collateral damage after the initial kill as Quick-Kill Jane realises just how ruthless the people chasing her are. I must admit that after reading Part 1 which was free, I immediately stumped up the cash and bought parts 2 and 3 for just £1.98. This might seem cheap and it is but let’s look at what you get for your money.

The books are only available as e-books and for some reason page numbers have not been included in the manuscript. As I’m reading this on a Kindle, all I’ve got to go on are the Kindle ‘Locations’ which I believe are lines of text, so each line has its own location. I think these are fixed when the manuscript is created so don’t change even if the reader increases or decrease the font size.

There are 1276 ‘locations’ or lines of text of which 816 are the novel. The remaining 460 are advertisements for the authors other books and various bits and pieces including the first two chapters from Part 2. The Amazon listing for Part 1 says its length is 75 pages using their own proprietary estimating algorithm. So as the story is 2/3rds of the locations this would equate to roughly 50 pages of the 75 Amazon quote. I know its old-fashioned, but I just like to know what I’m dealing with. In case you are wondering, Part 2 would be 55 pages and Part 3 would be 80 pages. This is all approximate of course.

What the above back of the envelope calculations allows me to conclude that I’ve managed to buy a cracking good 185 page, Science Fiction tale with spaceships, lasers, explosions and daring-do. All for £1.98. I’m getting a dammed good bargain here, but I do wonder how the authors survive on these margins. 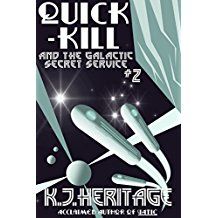 Anyway, Part 2 sees Quick-Kill assigned to his first mission. Although our agent has been given a new body and identity, they are allowed to adopt a codename to help identification. Of course, Quick-Kill Jane decides to drop the ‘Jane’ and just become Quick-Kill. Given the gender reassignment it’s probably a reasonable thing to do. In this assignment all Quick-Kill has to do is land on a planet and make contact with agent Pistol-Whip for a further briefing on the details of the mission.

It would appear to be a simple, easy mission to break out of prison the offspring of a rebel leader and get them off planet. What could possibly go wrong? Pretty much everything does go wrong. Lots of explosions, lasers and general mayhem and don’t forget the torture. As there’s a Part 3 coming up, it’s a given that Quick-Kill survives enough for there to be a Part 3. It would appear that these Galactic Secret Service assignments are a step up from the assassination jobs she used to get. 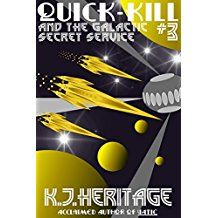 Part 3 is Quick-Kill’s second field assignment where they are operating completely independently and just at the point where things might be moving in the right direction, it all goes pear-shaped. Big Time. I have to admit Part 3 is a good study in misdirection. Something which I think will carry over to Part 4, should there ever be one, as I’m not convinced by the ending. I think there’s more to it than Quick-Kill thinks.

The imposed gender change gives the whole thing a rather novel twist as Quick-Kill Jane comes to terms as life as a man. It doesn’t help that the new body is also a lot taller and much heavier due to the large muscles than what she’s used to. If Quick-Kill ever makes it through to retirement, they might just opt for another smaller female body.

Let’s be honest here, I really liked ‘Quick-Kill And The Galactic Secret Service’. It’s a well-written rip-roaring tale with spaceships, lasers, explosions and daring-do so what’s not to like? I’m waiting for Part 4, that’s one thing not to like! 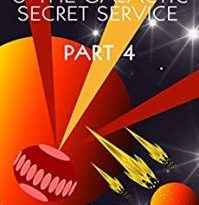 Quick-Kill and the Galactic Secret Service (Part 4) by K.J. Heritage.

Quick-Kill and the Galactic Secret Service (Part 4) by K.J. Heritage.