In my review of Quick-Kill and the Secret Service Parts 1-3 (www.sfcrowsnest.info/quick-kill-and-the-galactic-secret-service-parts-1-3-by-k-j-heritage/), I admitted that I have a nostalgic fondness for good old-fashioned Science Fiction with spaceships, lasers, explosions and daring-do. This series has delivered on all counts and I was looking forward to part 4 even though it is the last book in the series. At least for now, but more of that later. I’m referring to Quick-Kill as ‘he’ as Quick-Kill still has his assigned male gender body. 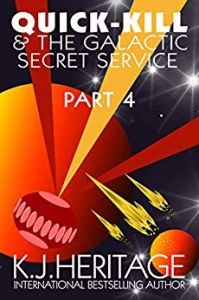 Quick Kill has been cleared of murdering his boss even though he did and everyone knows he did. This sentence alone implies a multi-layered plot and indeed there is quite a bit going on. Quick Kill wouldn’t know it as he’s been assigned a desk job in the Secret Service, trawling through data trying to locate the real killer. The one who unknowingly to Quick Kill, pulled the strings which led directly to the killing.

When some small inconsequential data item turns up, Quick Kill is the only person to spot it and extrapolate. Deciding that nobody can be trusted, he goes AWOL to investigate. The truth when it finally emerges is stranger than anything we could have expected and that’s all I can say without throwing in a fistful of plot spoilers. When you consider that Part 4 is only 75 pages, it’s another indication that there’s a lot going on but leaves me very little room for describing the story.

What I can say is that there is a good tidy ending. Sort of. It completes the main story but leaves an opening for author K.J. Heritage to pay another visit should he be so inclined. Looking at his recent output, he does seem to write a lot, I’m not sure he will, but the opening is there. I’m going to keep my eye on him as I would like another Quick-Kill story.

‘Quick-Kill And The Galactic Secret Service’ is a real gem of a story if, like me, you yearn for the Science Fiction of yesteryear. It has aliens, other worlds, lasers, spaceships and the Secret Service all packed into a nicely digestible four-part series. It is also very well written with a plot which is more complex then it first appears. All told, Parts 1–4 build into a rather good book about 260 pages in length for a total cost of £ 2.97. That’s cheaper than the black American Coffee I’ve just had from one of the many coffee shops here in London and the Quick-Kill books lasted longer!

If you have a Kindle then go along to Amazon and treat yourself to all four parts of ‘Quick-Kill And The Galactic Secret Service’. You won’t be disappointed. 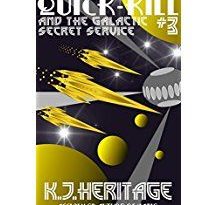