The title of Ross Anderson’s book, ‘Pulling A Rabbit Out A Hat: The Making Of Roger Rabbit’, should clue you into what the subject matter is here. There is an apology in the introduction that Disney wouldn’t play ball and supply photos from the film for the book. Then again, reading how they bought the book rights early and couldn’t do anything with it shows the problems their studio had at the time. Logistically, if they hadn’t had problems the Steven Spielberg and Bob Zemeckis wouldn’t have stepped in and we had the film we have today. 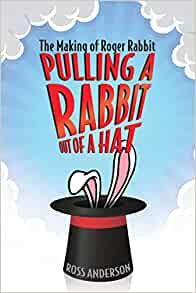 Gene K. Wolfe who wrote the original novel ‘Who Censored Roger Rabbit?’ had over 100 rejections before being accepted at St. Martin’s Press and then that was only because its editor, successful with another book, was allowed to choose one herself. There are drastic differences between the two mediums. In the original book, Roger was the murder victim being the chief one. In some respects, you would almost wonder why the original book wasn’t used for a second film.

Of course, much of the book is dealing with the production of the 1988 film, especially with the animation department. It’s rather interesting seeing thing being discussed in frames when you bear in mind 24 past in a second. However, this chapter also points out some of the gags that some of the animators tried to sneak into the film. Oddly, Jessica Rabbit showing her pink knickers was deliberate.

What is really interesting about this book is how the American unit at Glendale was left out of the promotion. ILM, by the way, was involved in dimensionalising effects. These days, we’re used to seeing multiple animation companies in the final credits. They might be long and winding but these people are no longer neglected. It’s rather interesting to read how many of the key animators roamed the world moving to where the work was, mostly on a freelance basis.

Equally, much of the British animation unit was forgotten at the Oscars, more so Chris Nott, who was animation supervisor. The comments at the end that the film would guarantee them work did pay off though. Oh, you also get a checklist of what material and characters were used from the Disney morgue/archive. Don’t think making a film of this complexity was an easy ride, it was a lot of hard work, short tempers and madness from time to…well, a lot of the time.

Seeing what happened after filming is quite extensive. All films are seen as investment, designed to make a lot of money back and ‘Who Framed Roger Rabbit’ was no exception to that. The marketing of Roger Rabbit, Jessica Rabbit and some of the other characters, like Baby Herman, made for some interesting choices when it came to cartoons with, occasionally, Steven Spielberg putting his foot down on some for, quite rightly, on some ideas that you have to wonder how they were approved in the first place.

When it comes to the appendixes where Anderson gives insight into the Disney Corporation from 1966-84 and shows their dirty laundry, I can understand why they weren’t willing to provide photos from the film for this book as Disney like to protect their image. Even so, they wouldn’t be what they are today without it. I should point out that there is a black and white photo section of 16 pages showing the key animators and people whom you have read about in this book, together with some in-house sketches and gags.

Oddly, the stumbling block to making a second Roger Rabbit film is more to do with Jessica Rabbit. Considering Disney licence the character, you do have to wonder at their thinking here as she was certainly one of the key attractions. After all, she isn’t bad, only drawn that way.

The mini-biographies of crew and some cast does present some interesting patterns of success in their careers right up to today. I mean, Chris Buck directed both of the two Disney ‘Frozen’ films making a direct connection into the past. Don Hahn produced ‘The Lion King’. Many of them have written books and teach class on animation, aware that they have to bring up a new generation into this field. The number of them who have wonder the Winsor McCay Award for later productions is quite startling. At least three of them are also involved in stage magic. Many of them have released books, especially on animation, and the ones I’ve looked up are still out there.

All in all, this is a very comprehensive book about the production of ‘Who Framed Roger Rabbit?’ that will get you to rewatch the film with a greater awareness of the hard work involved in making it. Cartoon films back then were not as successful as they could have been, certainly not from the House Of Mouse, and ‘Who Framed Roger Rabbit?’ changed all of that and the animation industry was back in a big way.