For as long as people have been creating stories, there have always been ones describing how the world ends. Science fiction writers have not only found ingenious ways to end the world but have also explored the aftermath of such a catastrophe. Many of these post-apocalypse scenarios have a society that has reverted to simpler form. There may be the remnants of technology around but without the infrastructure they are mere artefacts. The emphasis is on how resourceful humans cope with their changed fortunes. Occasionally, tech is still working in this new world. 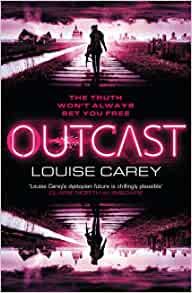 In Louise Carey’s first book ‘Inscape’, she sets up a world that is post-cataclysmic. After an event referred to as Meltdown, an advanced technology exists with the two halves of what is left of London. The parts are controlled by two huge technology companies, InTech and Thoughtfront. They are rivals and enemies.

‘Inscape’ introduced us to Tanta. She was brought up as a ward to the corporation. She, like all members of the community, have installed technology which enables communication via MindChat, a kind of digital telepathy that can be switched on and off. As a newly qualified security agent, she is paired with neuroengineer Cole and set to infiltrate Thoughtfront. When her programming is damaged, she realises that all wards like her are conditioned to love the Corporation. She learns that this, the Harlow programme, was developed by Cole who, horrified by what he had achieved, MindWiped himself so that he has no memory of what he did.

‘Outcast’ takes up where ‘Inscape’ finished. Despite having uncovered a Thoughtfront mole in the organisation, she has been demoted to a Guardian, basically a beat cop. She not only has to hide the fact that her programming has broken but to get back to her old position as a security agent, Cole has effectively been put under house arrest.

When Tanta is reinstated, by order of the Board, she is under the command of Kenway, a man who despises and wants her to fail at the task she is assigned, to find out why supply drones are not reaching the city. To make sure that happens, he makes Reet her team leader. Reet is Tanta’s lover and she has only just qualified. While Reet is still programmed to obey orders implicitly, Tanta is able to think for herself and her swift action during an attack on InTech’s HQ allows her to persuade the Board to allow Cole to work with her again. Kenway sends Tanta and Cole to Sodis, a supply depot on the south coast on the pretext of finding why the drones are going astray. In fact, it is to keep her and Cole out of the way when Harlow 2.0 is rolled out. Cole already knows that this will turn the population into little more than automatons.

In the Wilderness, the areas of the country outside InTech’s sphere of influence. It is there that Fliss and her crew are using Thoughtfront technology to down the supply drones. They get the supplies in return for the drones themselves.

Within the complex narrative, Tanta and Cole have bureaucracy to contend with as well as an enemy that is not what they anticipated. While both of them are still loyal to InTech, they can also see the flaws in the programme certain individuals want to pursue.

In these novels, Carey is treading a fine balance between those barely surviving in the Wilderness and technology dependent inhabitants of the company citadels. Within the domains of both InTech and Thoughtfront, the technology is at an advanced state to that we use now and the uses it is put to is disturbing. What Tanta has always considered a pleasant, protected place to live has some very dystopian aspects to it. A similar technology to that her cohort was implanted with is used on the worker population in the factories to turn their minds off while at work so they can only concentrate on their assigned tasks.

‘Outcast’ is a futuristic thriller with all the action well depicted. It is, however, a good idea to read ‘Inscape’ first to understand the society Tanta and Cole are operating in. 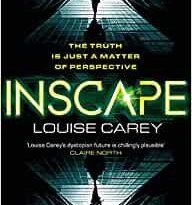