Set in a high-tech future London that has been built on the ruins of its pre-meltdown predecessor, Louise Carey’s novel ‘Inscape’ is a sparkling mix of cyberpunk, espionage, and post-apocalyptic social stratification. London and presumably the rest of the world is controlled by competing corporations, chiefly InTech and Thoughtfront who control one side of the Thames each. Other smaller corporations and affiliated companies exist alongside them while the unaffiliated are ignored and left to fend for themselves on the streets. 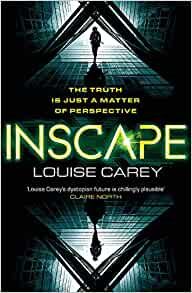 The main character, Tanta, is a ward of the corporation InTech, brought up in one of their orphanages, and glad to be given the opportunity to work for their security division. It doesn’t take long for us, the reader, to realise that her point of view is warped somehow. She seems far too eager to please and inordinately gratified at praise from her boss. This only becomes odder as we learn more about the corporations, the way they operate, and the life of indentured servitude that corporate wards are consigned to. In fact, the opening chapter seemed curiously devoid of emotion, even flat, considering the drama and tragedy that unfolds.

It’s only as the story progresses that I realised this was written deliberately to highlight Tanta’s state of mind, rather than being a flaw in the prose. Author Louise Carey has done an exceedingly clever job of setting up two different views of InTech, as she throws in the occasional section seen from another minor character’s point of view. The cover of the book reminded me of the poster for the film ‘Tenet’ and, while the promise is entirely different, it shares in common the startlingly different view of events that suddenly springs into view midway through the plot.

The other comparison that sprang to mind was when Tanta crosses the Thames into Thoughtscape territory. Citizens on both sides have their senses augmented by a virtual overlay of their surroundings that gives additional information and is activated by varied sets of haptic commands. On the opposite side of the Thames, everything suddenly looks different as they interact with Thoughtscape technology.

The dichotomy in views put me in mind of China Mieville’s ‘The City And The City’, though that was of course for an entirely different reason. The tagline for ‘Inscape’ is ‘The truth is just a matter of perspective’ and that tenet was woven cleverly throughout the book.

Tanta is assigned initially to track down some stolen files and then to infiltrate enemy territory to investigate the source of the leaks and consequential cyber attacks. Her partner, the neurotechnician Cole, creates a resigned and cynical counterpoint to Tanta’s youthful exuberance and unquestioning corporate loyalty and it’s fascinating to see each character through the other’s eyes and to witness the same event from two viewpoints.

The classified programme behind a lot of the intrigue is known as the Harlow Programme, named coincidentally after the town where I live. Louise Carey, according to the cover blurb, lives in nearby Welwyn. Perhaps there’s scope for a sequel about the corporate rivalry between these two towns…

A sequel is planned for ‘Inscape but, gratifyingly, the story in this book is brought to a satisfying conclusion rather than leaving us hanging on for another year. I enjoyed this book enough to want to read the next one. 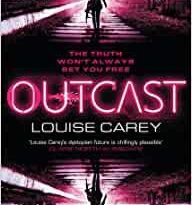