‘Oculus’ at least has a quirky and chaotic edge to its psychological character study of a pair of young adult siblings (Karen Gillan and Brenton Thwaites) coming to grips with their hair-raising past all predicated upon an inanimate object representing the ominous times of their unsettling youth. Sure, ‘Oculus’ invites that fairy tale tagline, .Mirror, mirror on the wall…’ but the suggested chills (although not stimulating to the point of great expectation) are serviceable and register with the right overtones pertaining to this probing frightfest. It is a shame that ‘Oculus’ never took complete advantage of the golden opportunity to realise its sinister potential in bringing its phobia-flavored hysteria to a higher level of cynical concentration. Nevertheless, Flanagan’s knee-jerking exposition does gingerly tap into the nightmarish psyche of its leading brother-sister tandem with a decent amount of underscoring decadence.  Somewhat calculating in its slow burn creepiness and dragged out suspense, ‘Oculus’ reminds some that what you see at face value may be a harsh reality to swallow in the long run.

Flanagan, primarily known as a television director, co-wrote ‘Oculus’ along with screenwriter Jeff Howard. Both scribers do an effective job at selling their peek-a-boo production as an inquisitive and gently outlandish case study of psychological fear. If ‘Oculus’ managed to instil more depth and dimension into its thrill-seeking therapeutic madness then this horror sideshow could have been solidly compelling on a whole new radical foundation. Filmmaker Flanagan’s previous low-budgeted ‘Absentia’ surprisingly had some bite to its bone. ‘Oculus’ may be familiar and cinematic in choppiness but it does have its fair share of manufactured mayhem regardless of its aimlessness in scattered directions.

The sordid story deals with the trials and tribulations of one Tim Russell (Thwaites) exiting the mental institution he has resided at for the last decade since his days as a troubled adolescent. His big sister Kaylie (Karen Gillan, ‘Doctor Who’) is there to meet Tim upon his discharge from the facility. Kaylie tries to reason with Tim about what may have caused such a lasting and terrorising obstacle for both their harried childhood recollections. In this case, the existence of a 300 year-old wall mirror believed to be possessed and drenched in unsuspecting wickedness. Kaylie reminds Tim that as children they both vowed to exact revenge on this monstrous mirror. Now, as young adults, they are in the position to destroy this heinous reflective object. However, Kaylie’s intentions to crack this mirror into shattered glass is easier said than done.  There is no going back as the siblings need to eradicate this household menace that has been the source of their misery ever since their junior-sized livelihood.

The backstory to the menacing mirror that haunts Kaylie and Tim’s scarred reminiscences includes the scary account as to how it made their father Alan (Rory Cochrane) kill their mother Marie (Katee Sackhoff) after he purchased this insidious item for the house. As a result of Alan going berserk, poor Tim had no choice but to end his father’s life. So the only honorable thing that Kaylie and Tim must do is to get rid of the morbid mirror before it does some considerable and unpredictable harm to others. Interestingly, the film switches back and forth from the present day to the past (Annalise Basso and Garrett Ryan portraying the younger Kaylie and Tim) as the Russell household takes on a different perverse perspective under the roof yet conveying the same kind of mental and emotional detachment for the Russell offspring. Admittedly, the usage of varying timelines are handled rather skillfully by Flanagan’s impish and bouncy direction.

Granted that ‘Oculus’ in many ways is conventional in its creepy mode and never quite explores its dastardly dilemma with distinctive freshness or flavor. One may chalk up ‘Oculus’ to arbitrarily tip-toeing in the screeching territory that made its cautionary contemporaries such as ‘The Conjuring’ and ‘Insidious’ so pervasive in the modern-day and methodical horror scene. On the other hand, what can be commended about ‘Oculus’ is its symbolic naughtiness tied into the antiquated notion that one can never go home again…or can but must overcome the consequences that lie ahead. Also, there is a buried satirical bit about consumerism and the boogeyman effect that we all subconsciously carry on our shoulders from the so-called implied innocence of our humble beginnings to complicated adulthood that is gradually digested in Flanagan’s gloom-and-doom exposition. Strangely, ‘Oculus’ is both playful and bizarrely twisted in its corrosive convictions despite some sketchy traces of tension.

In some off-the-wall realm, ‘Oculus’ works its seedy magic because the concept of frightening furniture and childhood disillusionment is not exactly what one would expect as a passable taunting tie-in of sorts. The ‘Oculus’ mind-bending mirror reflects what we have all witnessed before in the confines of a giddy supernatural spectacle but sometimes receiving the repetitive imagery of freakish despair can cast a tolerable and appetising shifty shadow looking right back. 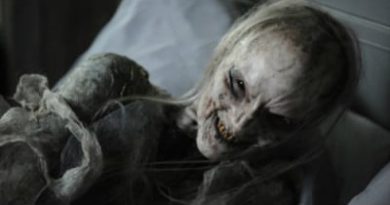 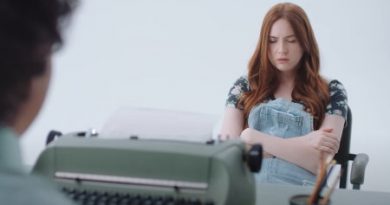 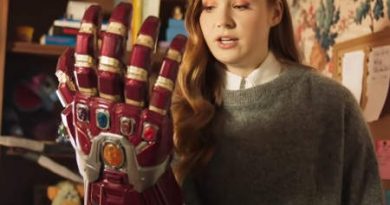