An intriguing blend of hard SF, corporate espionage and conspiracy theory, ‘Nucleation’ is a solidly enjoyable novel from Kimberley Unger that picks up several recognisable SF tropes and combines them into a relatable yet refreshing tale. Although the story involves wormholes, quantum entanglement and other high-tech concepts, the prose is perfectly accessible, throwing in jargon used by the various operatives that paints a clear picture of what’s going on without resorting to technobabble and info-dumping. 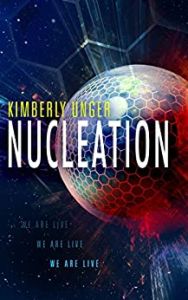 Helen Vectorovich operates remote probes used in mining and exploration, gaining real-time control via the aforementioned wormholes and quantum entanglement. The set-up back at their base and the technology that uses nanites to construct the remote facilities are both equally fascinating. The camaraderie, competition and politicising among the employees of Far Reaches, the corporation Helen works for, make for a grounded and realistic background.

I was never entirely sure where they were based though. I presume they were on Earth, but it wasn’t clear. It also wasn’t clear for a long time whether the probes were in the far reaches of the Solar System or in other star systems. Everything was referred to as being a billion miles away, but I began to wonder if that was just a figure of speech among the operatives when there was reference to other stars. This was the only thing that interfered with my enjoyment of the story as I kept trying to reconcile the references.

The pace is slow and steady, following mission protocols and the start-stop progress of research and development programmes. Despite the high-tech setting and potential ramifications of their discoveries, this is not an edge-of-the-seat thriller. Helen Victorovich is very methodical, using checklists for every stage of the mission and mirroring this practice with metaphorical checklists as she navigates other aspects of her life.

She’s not comfortable with personal interactions, is impatient with medical protocols and is averse to bureaucratic red tape but, in each case, imagines a checklist to be worked through to reach her goal, whether that’s getting out of sick bay or ending an awkward encounter with a rival operative. This gives much of the book an impersonal, unemotional air, but also gives us an insight into Helen’s character and the way she deals with life when not working in virtual, remote space.

The book reminded me in some ways of C.J.Cherryh’s ‘Alliance/Union’ books wherein the mechanics and protocols of spaceflight are very proceduralised and there is sometimes a sense of frustration where you wish the characters could break free and do something more dramatic. It does, however, give a grounded and realistic feel to the setting.

Altogether then, an interesting premise, a unique character and a nicely developed plot, there’s obviously scope for more here for maybe a sequel and for more details on some of the background stories that are mentioned. I’d be quite happy to read more about Helen Vectorovich and the rest of her team.

One thought on “Nucleation by Kimberley Unger (book review).”