‘Fever Moon’ is a graphic novel in the Mac & Barrons series by #1 New York Times bestseller Karen Marie Moning, adapted from her prose by writer David Lawrence and illustrators Al Rio and Cliff Richards. The basic premise is that the walls between humans and Fae have been torn down and they are in our world. A third of Earth’s population is already dead, Dublin is a war zone and chaos reigns. 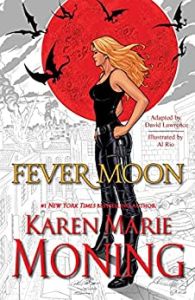 The heroine is a shapely female named MacKayla Lane who was drugged and raped by dark Unseelie princes but somehow survived. Now, equipped with the Spear of Destiny and a tight halter top over her ample bosom that bears the legend ‘I’m a Juicy Girl’, she battles the Unseelie alongside Jericho Barrons, a large muscular male. Her major quest is to find the Sinsar Dubh, a book of dark magic that can send the Unseelie back to Hell but there are lots of things to do meanwhile. In this episode, a powerful Unseelie known as the Fear Dorcha is stealing the features of those close to MacKayla and leaving them in a coma. It takes an eye from one and a mouth from another. The Fear Dorcha looks kind of cool in his top hat and frock coat.

In the course of the story, MacKayla gets information from a Fae prince who can give her an orgasm just by kissing her. The Fae are into sex and exploit humans for that purpose, turning some into sex slaves. MacKayla avoided this fate. Sex is a large part of the scenario.

The graphic novel does a pretty good job of squeezing in the complex background material and the plot progresses nicely to a conclusion. It all made sense. The first half of the book is drawn by Al Rio in a style reminiscent of Jim Steranko’s work on ‘Nick Fury: Agent Of Shield’. At least, the lines and the blacks are similar. The panel layout is not as clever but the one-page splash panels and double-page spreads echo Steranko’s look.

Al Rio was the author’s preferred artist but unfortunately passed away half-way through the project. His successor, Cliff Richards, tried to keep the look similar and almost succeeded. The figures aren’t as well-proportioned and it looked more like Keith Giffen’s Kirby-clone style than Steranko, but it was okay. When you’re drawing Mac, it’s important to get the proportions right. She’s a juicy girl.

Which may be a problem. I quite liked the graphic novel but the illustrations featuring top-heavy naked women and well-muscled men alongside monsters and demons will appeal to a certain demographic and I don’t know if it’s the same one that reads the books. Prose has no pictures and probably delves a bit deeper into character rather than appearance. I assume this kind of sexy fantasy, like the ‘Twilight’ series, is for female readers. Will they like the graphic novel?

Can they identify strongly with MacKayla when her charms are so obviously displayed? Probably. Men enjoy macho hero movies without ever deluding ourselves that we actually look like (fill in name of a handsome, muscular actor).

‘Fever Moon’ is an outrageous fantasy into which you can escape for a while. Enjoy. 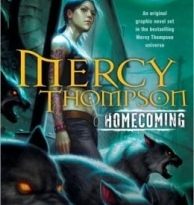