Skip to content
You are here:Home » Life on Mars gets Chinese adaption: how do you say “Take that seat belt off! You’re a police officer, not a bloody vicar” in Mandarin?
Cri-Fi TV
February 20, 2019February 20, 2019 ColonelFrog Life on Mars 1 min read
688.3k
SHARES
ShareTweet

Life on Mars is getting an Chinese adaption. The BBC will be working with Phoenix Entertainment Group to create a local Mandarin adaptation. The deal marks BBC Studios’ first partnership with the Beijing-based production house.

So, how do you say “Take that seat belt off! You’re a police officer, not a bloody vicar” in Mandarin? Or “Listen love, how about you detect me some Garibaldi biscuits to go with this cuppa?”

Pre-production on the series will start this year with Phoenix producing 24 episodes of Life on Mars, which originally broadcast on BBC One in 2006.  The drama will be based in 1990’s Beijing, a time of economic growth and cultural prosperity. A landmark decade as China became increasingly open to the rest of the world culturally. The Chinese version of Life on Mars will reflect this era of change, conflict and challenges.

The BAFTA and Emmy award-winning Life on Mars, which starred John Simm and Philip Glenister in the UK version, sees a present day detective transported mysteriously back in time, after a near-fatal accident.  BBC Studios has previously licensed the format to Russia, Spain, Czech Republic and South Korea.

David Weiland, EVP Asia, BBC Studios told SFcrowsnest: “I am delighted that our first partnership with Phoenix Entertainment Group is Life on Mars which ranks as one of the best dramas to come out of the UK and is a great example of the breadth and wealth of our scripted formats catalogue.  We have a huge range of high quality scripted titles from Doctor Foster and Luther to Thirteen and In The Club, shows that would captivate Chinese audiences.  I look forward to viewers enjoying this local version of Life on Mars as they go back 30 years in time.,

Bihai Wu, Vice President & General Manager, Phoenix Entertainment Group, added: “Following the huge success of our hit drama, Day and Night, developed and produced by Phoenix Entertainment Group for Youku, we have been carefully considering other shows that could meet the criteria of high quality and consistency with our slate and brand. Life on Mars drew our interest because of its originality and superb story telling.” 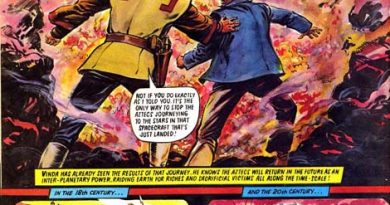