The chap behind the retro time-travelling TV crime series, Life on Mars (and its follow-up Ashes to Ashes), Matthew Graham, is coming back with a new series for 20th Century Fox that sounds a little like Sliders combined with Hill Street Blues. Called Para Time – as in parallel universe, rather than the British nickname for a paratrooper – it features a special department set up to investigate and control crimes committed across multiple parallel universes.

Of course, this is what current TV scifi series Fringe has ended up being all about, but this will, we suspect, be more similar in execution to the classic comic strip from StarLord, TimeQuake, where a far future tech-backed law agency seeks to stop time travelling criminals meddling with the past to create parallel universes that suit their agenda (anything from killing Steve Jobs and founding Apple in his stead, to giving Hitler the plans to the A-bomb at the start of world war two).

Matthew Graham has also dabbled with Doctor Who episodes, and those with longer memories, may also recall his very badly scheduled series The Last Train. In the latter, a bunch of commuters are accidentally frozen by cryogenic gas when a comet wipes out most life on Earth. They wake up centuries in the future and have to survive against wild dogs and now savage human survivors, while travelling to a supposedly still-functioning underground survival shelter in Scotland. 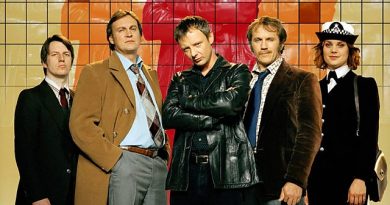 Life on Mars gets Chinese adaption: how do you say “Take that seat belt off! You’re a police officer, not a bloody vicar” in Mandarin?

Life on Mars gets Chinese adaption: how do you say “Take that seat belt off! You’re a police officer, not a bloody vicar” in Mandarin?