If you‘re wondering why it took so long before I reviewed the third ‘Iron Man’ film, then blame some confusion on the Net as to whether the British or American version had the most minutes running time. Even more amazing, it’s taken a considerable time before the DVD had a price drop. Usually, this happens after a few months not the eight or nine this time around. I could understand if ‘Iron Man 3’ had the full works like the earlier two films with audio commentaries and a load of extras but this DVD is mediocre in comparison with only one of these and a preview of ‘Thor – The Dark World’. After ignoring Aldrich Killian (actor Guy Pearce) a eight years back, Tony Stark (actor Robert Downey Jr.) finds himself learning from his past in his reformed present and his Iron Man identity. Oriental terrorist, the Mandarin (actor Ben Kingsley) is causing havoc in the USA and yet in his broadcasts, no one points out that he doesn’t have an oriental language. Asked what he is going to do, Tony Stark offers himself as a target and forgets the consequences that someone might attack him at home. Saving Pepper Potts (actor Gwyneth Paltrow), Stark barely escapes in the badly damaged mark 42 experimental armour to a town in the middle of nowhere and gets the help of kid Harley Keener (actor Ty Simpkins) to get some emergency repairs done when he inadvertently takes over his workshop/garage.

In the meantime, Jim Rhodes as the Iron Patriot (actor Don Cheadle) has been ordered to capture the Mandarin only to be captured himself. Not helped by the fact that his armour had been updated by Advanced Idea Mechanics. With minimal equipment, Stark has to get things sorted out and rescue the President amongst other things.

I’m probably amongst the last people to see this film so anything I say here can’t be called spoiler. I was disappointed that the use of the Mandarin was an even weaker shadow of his comicbook version. Here was an opportunity to give Iron Man a really deadly foe that was not dependent on armour and turning him into comic relief is something I see as a mistake. I know people have commented that Stark rarely wears his armour in this film but there aren’t many opponents who could stand up to him when he’s wearing it. Even the mark 42 without its flying capacity was still formidable.

With the end of the film, a lot of Stark’s issues are resolved, almost as though there was a thought that there was not going to be a fourth film, although a Bond-like warning of return at the end is supposed to dispel that, subject to contract.

Iron Man really needs a formidable opponent. I would love to see the Titanium Man myself and a re-make of their first battle from the 1960s. ‘Tales Of Suspense’. I know in the first two films, Stark fought against armoured foes and I suspect the third was to change this but the opportunity could have been used so much better than here.

That doesn’t mean it isn’t an interesting film and there are some nice moments. Seeing how the rescue of the people from Airforce One was made in the solitary extra is fascinating showing that real still works over CGI. However, the first two films set the benchmark and needed more to stretch it here. 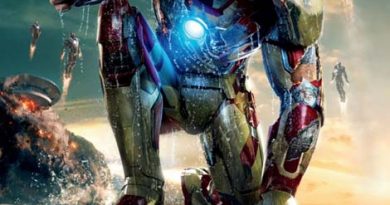