Our chums at NASA certainly know how to wow us. Not only have they landed the Curiosity rover on Mars without a hitch, they actually took a photo of it on its chute on the way down! The orbiter had a Mars-cam? Now that’s class. Or to put it in a less excited fan-type way, as the JPL’s Sarah Milkovich did… “If HiRISE took the image one second before or one second after, we probably would be looking at an empty Martian landscape. When you consider that we have been working on this sequence since March and had to upload commands to the spacecraft about 72 hours prior to the image being taken, you begin to realize how challenging this picture was to obtain.”

The photo was snapped while the orbiter was 211 miles up from the rover. Curiosity and its rocket-propelled backpack, contained within the conical-shaped back shell, had not deployed yet. At the time, Curiosity was about two miles above the surface of Mars. 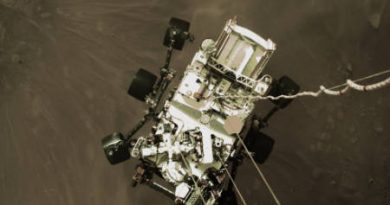 Mars, as Red as roses as NASA’s Perseverance Rover lands and sends back pics (science news).