‘Figures From Life: Drawing With Style’ is the fourth book by Patrick J. Jones and, as the title suggests, this time you’re in an artbook showing how to draw real people, mostly unclad, but don’t expect to see many of them. You’re also going to be using charcoal, pastels, rags and even an automated eraser as all part of your kit. Jones demonstrates how to capture a model from 10 to 50 minutes work. This is also the first book in a while that I’ve seen someone actually explaining to pay attention which bones come closest to the skin and how they interplay with the muscles. This is also important to pay attention to if you want to understand how the outline of muscles overlap each other. Although it’s not essential to know what each of the muscles are called, understanding their grouping will help structure your own illustrations better. After finishing this book last week, I find whenever I’m in study mode now, I’m paying attention to what Jones has covered so it obviously rubs off. 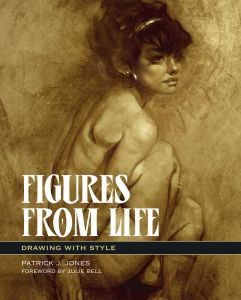 Although I’ve never had a need to use a light box or Camera Lucida for copying pictures, I do have to contest that’s not all it’s used for. Comicbook artists will use it to enlarge their thumbnail layouts than redraw and enlarge their work so they get the lines they caught the first time. I can understand that simply because it’s hard to capture the exact line each time or even to pick out the right lines.

Much of Jones’ work here shows what he does as he teaches art. I don’t normally play with charcoal as I find it far too messy and having to take blood tests all the time, the last thing I want to do is push some carbon under my skin, but he points out that there are some made which are a lot harder than pastel and in pencil form which is beginning to make me think about trying it some time. I’ve always thought of electric erasers as purely for erasing rather than highlighting, so have something else to experiment with.

Jones also examines the problems of photograph distortion and points out that a 50mm lens should help get you around that. With all the advances in digital camera, you would think by now that someone would have come up with the means to solve this at lens level or even in software.

All of Jones’ other books have centred on him using oils, seeing how he works in charcoal and pastels and centring more on the figure than backgrounds should be quite an eye-opener for you if you’ve bought his other books.

I tend to agree with him that all artists need to practice drawing the human form. With life studies, you don’t need to go through to completion but learn how to capture the essence quickly. When I took art class years ago, I tended to get a dozen pictures drawn from various angles while others in the class took all their time doing one. Jones shows both techniques but it all depends on what you want to draw and allowing the model to rest from time to time.

If you want to improve your anatomy and drawing skills then this is a useful book. You might need to be more than a beginner for some of this but you might break from any previous bad habits as well. 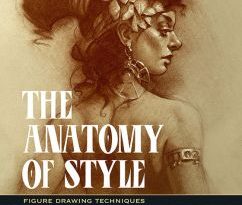 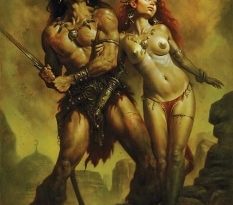 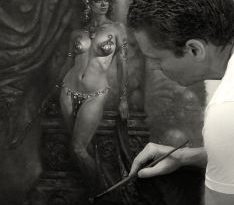